Maple Treeway is the third race course of the Star Cup in Mario Kart Wii. It takes place in a large forest during autumn. The track consists of racing on tree branches, on the treetops and even within the trees themselves. Big Wigglers appear on the treetops, and driving into them will hinder any racer. Leaf piles flank various parts of the track, and driving through them reveals Mushrooms, Bananas, and rarely, Stars. The course's name may be a portmanteau of the words "tree" and "freeway."

A slower, lower-pitched, and more sinister version of the music used for Maple Treeway is also used for Bowser's Castle, despite the tracks sharing little similarity. Another arrangement of the song is heard in the second half of the credits music along with Luigi Circuit/Mario Circuit and Moo Moo Meadows. In Paper Mario: The Origami King, a slower-paced Eastern rendition of Maple Treeway's music plays in the Tranquil Pipes Teahouse of Shogun Studios. Additionally, the music for the Tree Zone map in Super Mario Land 2: 6 Golden Coins bears a resemblance to this course's music.

Right after the starting line

The course starts out with a slight downhill curve approaching the first set of Item Boxes. After the set of Item Boxes, there is a curve to the left which leads to a Barrel Cannon that blasts players into a giant tree, directly through its leaves and branches.

After the player lands, the player turns right and through some leaf piles. The player will then exit the insides of the tree and make a left U-turn on a large branch. The turn on the branch is very tight and the player can fall off both sides if they happen to drift incorrectly. It leads into a large circular area on the top of the tree with two Big Wigglers on it who move about as obstacles. There are also some more leaf piles for the player to drive through. The Wigglers will bounce back the player if the player crashes into them.

After the Wiggler area, there is a right turn that slightly dips on a branch, which has two Dash Panels on it. The player may also fall off both sides in this area, so the player must be careful about using the Dash Panels lest they boost off the track. Also, if the player is very slow, they will fall off before the curve with a half-pipe ramp, since there is a small gap in-between the Dash Panel sections and the section with the half-pipe ramp. Similarly, the curve following the half-pipe leads right towards a small crevice that it is possible to fall into. On the ramp are Item Boxes that the player can use. After these turns, the track straightens out, with some more leaf piles strewn about. Along this straightaway, the player will drive across a narrow bridge, which makes it easy for heavier players to knock lighter players off.

After the bridge is a ramp with a Dash Panel on it. The player then lands on one more thick branch. After a very slight turn to the left, there is a rope bridge shifting up and down, which the player may perform tricks on. The A.I. tends to fall off in this area of the course, and the wavy bridge may also throw the player off course when performing stunts, sending them off the track. After the bridge is a wide straightaway with two side routes that go up into the trees, with two tree roots obscuring the main path. The player may perform a trick if they manage to drive off them like a ramp. The side routes feature an additional Item Box each, and end with a ramp with a Dash Panel. After the routes converge, the player will reach the finish line.

Maple Treeway reappears in Mario Kart 7 as the fourth and last course of the Leaf Cup.

The launch after the start/finish line (which has the classic Mario Kart logo recolored from lilac/light brown to orange/yellow) now encompasses a Glide Ramp. Players cannot aim their flight and they are also no longer immune to items while in the launcher, and being hit by anything (or intentionally stowing their glider) will result in having to be rescued by Lakitu.

After the Big Wiggler area, the branch with two Dash Panels is now flat. The half-pipe after the branch with two Dash Panels was also removed. After the final turn of this track, instead of a waving metal net off which racers can perform tricks, a Glide Ramp allows them to cross the large gap. Additionally, the leaf piles may also now release coins and Green Shells. Despite the course being slightly shortened, it is the longest classic course in the game. It also includes a falling leaves effect.

The course in Mario Kart Tour with Jack-o'-lanterns

Maple Treeway reappears in Mario Kart Tour, starting with the 2020 Halloween Tour. It is the first course originally from Mario Kart Wii to reappear in the game. The track plays akin to its Mario Kart 7 iteration, but with a few subtle changes, such as the removal of the Dash Panel on the bridge at the beginning, the leaves on the course being made a more solid orange, the section after the treetop being widened, and the halfpipe ramp from Mario Kart Wii being reimplemented in the same location. The track was visually overhauled, with a more fantasy-like feel and the section up to the top of the tree being redesigned to be more open, showing the landscape. The Big Wigglers on the treetop now spin racers out instead of pushing them back and they now walk around the treetop clockwise instead of counterclockwise. The Mario Kart logo on the starting banner has also changed to the modern logo and recolored to white/dark brown. The course is a favorite of Toad (Party Time), Daisy (Fairy), Mario (Halloween), Cat Peach, Pauline (Rose), Luigi (Painter), Tanooki Mario, Dixie Kong, Bowser (Santa), Waluigi (Vampire), and the King Boo Mii Racing Suit. It can also be a favorite of Mario (Baseball) and Luigi (Golf) if they reach level 3, Shy Guy (Gold) and King Boo (Gold) if they reach level 6, and Meowser if he reaches level 8. It is the first course in Mario Kart Tour to include half-pipe ramps from Mario Kart Wii. As with other courses in the game, Maple Treeway has a reverse variant, a trick variant, and a reverse/trick variant, referred to as Maple Treeway R, Maple Treeway T, and Maple Treeway R/T respectively; the reverse and trick variants were introduced alongside the normal variant in the 2020 Halloween Tour, while the reverse/trick variant was introduced in the 2021 Autumn Tour. In the reverse/trick variant, the gliding sections are replaced with some ramps and Mushroom Trampolines. Maple Treeway is the third course after DS DK Pass and DS Airship Fortress to be the signature course of two tours (the 2020 Halloween Tour and the 2021 Autumn Tour). 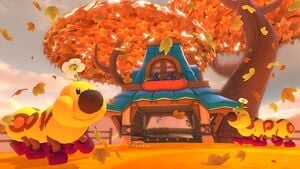 The top of the big tree

Maple Treeway returns in Mario Kart 8 Deluxe as part of the Booster Course Pass downloadable content. It is the fourth and last course of the Rock Cup, and was added in the third wave of the DLC. It has received significant visual upgrades compared to its appearance in Mario Kart Tour.[3] The halfpipe from the Mario Kart Tour version of the course is maintained, making it one of two courses in the third wave to reintroduce the mechanic to Mario Kart 8 Deluxe, the other being Merry Mountain. Also like in Merry Mountain, the halfpipe also has the appearance and effect of an Antigravity Panel. The Dash Panels along the shortcut that were removed in Mario Kart Tour were restored. The Big Wigglers also now move around differently and will spin out any player that collides with it at a high rate of speed. Like Mario Kart 7, the mini map now has shaded areas signifying roads normally covered by the large maple tree section, specifically for the road directly after the first gliding section and the bridge leading to the tree's exit. This course is the longest three-lap course in the game, superseding DS Waluigi Pinball from the previous wave of the Booster Course Pass.

Excluding Mario Kart 8's Rainbow Road theme, which is used in all trailers for the Booster Course Pass, Wii Maple Treeway was one of two courses whose music was used for the second trailer for Wave 3, alongside 3DS Rainbow Road.