“You saved me! Thanks a bundle!”
—Pianta, Super Mario Sunshine

Piantas are a group of island-dwelling people that debuted in Super Mario Sunshine. They are humanoid, appear in a variety of colors, and sport small palm trees growing out of the top of their heads. Their name means "plant" in Italian.

Piantas typically wear grass skirts or grass dresses, although other Piantas have been seen wearing more conventional attires. Piantas are generally laid back and friendly, yet they also have a fairly short temper. Despite their placid temperament, they also boast impressive strength. Since their debut in Super Mario Sunshine, Piantas have made recurring appearances, most notably in Super Mario Galaxy 2, Paper Mario: The Thousand-Year Door, and the Mario Baseball series.

“Why can't you just suck them up with a vacuum or something?”
—Pianta, Super Mario Sunshine

In Super Mario Sunshine, Piantas share their island home with the Nokis. While the Nokis mostly live in Noki Bay, the Piantas mainly reside in Pianta Village. However, while Pianta Village is their primary home, Piantas live all over the island. Many Piantas make a living by producing and selling fruits in small markets in Delfino Plaza. When sprayed with FLUDD or otherwise gotten wet, many of them shake off the water, then shout angrily at Mario. They also shout at him if he jumps on them.

Certain Piantas can throw Mario. Mario can sometimes use this to his advantage by having a Pianta toss him to higher ledges and cliffs or across pits.

A male Pianta as seen in Super Mario Galaxy 2.

Piantas appear in Super Mario Galaxy 2 in one galaxy, the Starshine Beach Galaxy, which seems to be based on the different areas from Isle Delfino. They are the only friendly characters not to have a representative on Starship Mario. The Piantas that appear are all male, and their role is similar to that of the Piantas from Super Mario Sunshine, hurling Mario to various spots; Mario does not need to initiate a conversation in order to be thrown. As before, jumping on them makes them yell at Mario.

Piantas appear as spectators in Delfino Square in Mario Kart DS. In Delfino Square, a stone Pianta statue appears shortly after the start of the race.

Piantas appear as spectators in Coconut Mall, Daisy Circuit, DS Delfino Square, GCN Peach Beach and Delfino Pier in Mario Kart Wii. The Pianta statue in Delfino Square reappears in this game. In Coconut Mall, Piantas not only appear as spectators, but indicate the correct escalator for the players to use and a yellow one appears as the shop assistant in the store "Delfino Dream", which can be passed through as a shortcut. They also appear on posters around this course, and on the "Tropical Mart" and "Tropical Grocery" advertisements.

Piantas no longer appear as spectators in GCN Daisy Cruiser and Wii Coconut Mall in Mario Kart 7, with the ones indicating the escalators in the latter in particular being replaced by arrows, though the Pianta on the "Coconut Mall" sign is still present. 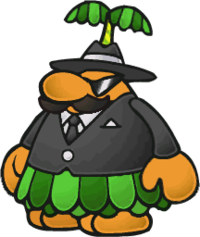 Don Pianta, a Pianta from Paper Mario: The Thousand-Year Door.

In Paper Mario: The Thousand-Year Door, Piantas are one of the many peoples living in Rogueport. Here, the attitude of the Piantas is different, and they are organized in the criminal organization known as the Pianta syndicate, led by Don Pianta, and later Frankie. They have control of Rogueport's west side, and are rivaling with the Robbo Thieves led by Ishnail, who operate on the east side.

Piantas appear in Mario Power Tennis for the Nintendo GameCube as spectators, and in Mario Tennis: Power Tour for the Game Boy Advance as NPCs and spectators. 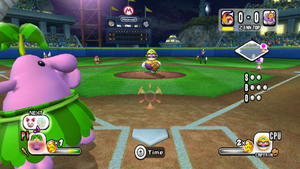 Red Pianta gets set to bat in Mario Super Sluggers.

Piantas are playable characters in Mario Superstar Baseball and Mario Super Sluggers for the first time. In both installments, all the playable Piantas are males, come in the blue, red, and yellow variants, and have the Laser Beam ability. The male Red Pianta is more magenta-colored than red in the Mario Baseball series. In Mario Super Sluggers, while the Piantas share good chemistry with the Toads and Toadsworth, the Nokis have good chemistry with Toadette, whose chemistry is neutral with the Piantas. In a similar manner, the Toads and Toadsworth have neutral chemistry with the Nokis. Their bats are trees.

In Mario Superstar Baseball, Piantas are the weakest batters among all the Power characters, with the Red Pianta featuring slightly better batting than the other Pianta colors (rivaling King Boo). They are also decent pitchers, but have poor fielding skills, and are very slow runners.

In Mario Super Sluggers, all three Piantas have their batting skills improved, making it easier for them to score home runs. They are still rather slow, and they are still poor fielders. Their pitching is also slightly weaker, although the blue Pianta's pitching remains unchanged.

Piantas appear throughout Goomba's Booty Boardwalk in Mario Party 8. Two pink females are seen hula dancing at the beginning, similar to the Doot-Doot Sisters, but have no certain purpose. Yellow Pianta Throwers toss the player about five to eight spaces ahead if the player lands on one of their Green Spaces. Blue fishing Piantas[2] fish a piece of Candy for the player if their Green Space is landed on. Lastly, small purple females run the Candy shops. A blue Pianta also appears as one of the thirty Mario characters racing in Moped Mayhem.

The Pianta in the minigame Pianta Pool.

In Mario Party 9, one blue Pianta appears in the minigame Pianta Pool. During the game, he throws rings out into the pool, which the players must grab so that Cheep Cheeps can jump through them. He only tosses the rings into the pool once all of them have been used during that round.

Some Piantas in Mario & Sonic at the Olympic Games.

Piantas appear as spectators in the Wii version of Mario & Sonic at the Olympic Games.

Piantas return as spectators in the Wii version of Mario & Sonic at the Olympic Winter Games, where one can also be found as a VIP member that rewards the player with 100 star points.

In the Wii U version of Mario & Sonic at the Rio 2016 Olympic Games, a blue male Pianta runs the Mario item stand on Copacabana Beach.

A group of Piantas appear in Super Smash Bros. Ultimate as a Novice-class support spirit. When used, the fighter starts the battle with a Banana Gun. The spirit battle takes place on the Delfino Plaza stage and features multiple variously-colored Kirbys meant to simulate Piantas. The spirit can be obtained by winning this battle on the Spirit Board or by clearing the challenge of purchasing an item during a Sunday sale in the Vault Shop.

In Mario Sports Mix, Piantas appear as spectators and are often seen in several courts of the game. 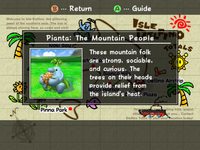 These mountain folk are strong, sociable, and curious. The trees on their heads provide relief from the island's heat.

This hefty resident of Isle Delfino swings away with a palm tree branch instead of a bat, but it must be dense wood, because Blue Pianta can hit it a mile when he charges all the way up! 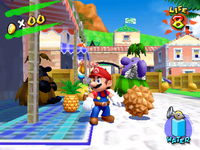