Special Attacks are moves that are often featured in Dream Events in the Mario & Sonic series. Special Attacks allow characters to perform special moves in events with a variety of beneficial effects, such as powerful hits, high point-scoring moves and bursts of speed. The Attacks are often limited by filling gauges and collecting items. Normally, each character has a unique animation for their special attack, and depending on the event, may also have a unique effect as well.

Special Attacks appear in two events in the Wii version of Mario & Sonic at the Olympic Games, Dream Fencing and Dream Table Tennis. Players can use them by pressing the A and B Buttons at the same time while performing a lunge or hit. Whilst playing the two events, there is a bar at the bottom which fills with energy every hit. When the bar is filled, the players can use a special attack and the bar will refill again to charge a new attack. The maximum amount of attacks the player can store at one time is three. 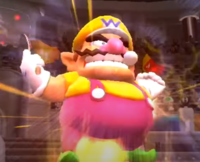 Similar to the Wii version, the Nintendo DS version includes special attacks in a selection of Dream Events, with the effect and usage of the attacks differing between events. Each character has a unique animation for their attacks, but the specific effect on the gameplay is sometimes shared with other characters.

In Dream Table Tennis, special attacks are charged by filling a gauge onscreen, that allows the player to store up to three special attacks at once. The attacks are used by pressing the X Button when the player has one stored, which plays a short animation before returning a powerful shot with one of a number of effects to the opponent. Special attacks can be returned, but are difficult to do so. For special attacks that return multiple balls, the player an hit any of the balls back to continue the rally.

In the Nintendo 3DS version of Mario & Sonic at the London 2012 Olympic Games, Special Attacks are featured in a select number of Events. In this game, each character's Special Attack functions the same as the others in their entry characters group, due to the way that playable characters are grouped for the event. Each character still retains a unique animation or effect for their Special Attacks. When a Special Attack is started, a banner featuring the character's face will appear onscreen with their name preceding the word "Special" on it, before launching into the move.

The Waluigi Special in Long Jump.

In Long Jump, Special Attacks can be performed by jumping at a near perfect angle right before the takeoff board, and will give the character a greater distance. 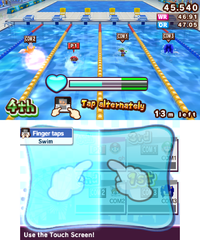 The Tails Special in 100m Freestyle.

In 100m Freestyle, Special Attacks are performed by keeping the character's speed in the green area at the end of the speed meter. The character will periodically gain a speed boost from doing so.

In Judo, when character perform perfect throws, which award them a full point, the animation to start one is very similar to that used for Special Attacks, but is not identical, as the names of the special moves are replaced with the Judo move performed and all characters perform the moves the same way.

In Balance Beam, each character performs a special move as their last one to dismount from the beam. For the last move, the player must move the indicator around a more complex shape, such as a crown or tight S, and doing so successfully will allow their character to perform another cartwheel along the beam before dismounting with a spinning jump.

In Rings, each character will perform their special move as the last one in the routine, however is the player does not maintain the correct input for it, the move will fail and the character will fall off, getting a much lower score. The special move requires the player to hold a diagonal direction on the Circle Pad and two of the A, B, X or Y Buttons. Each character performs a unique pose on the rings for their special.