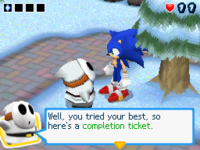 The White Shy Guy about to give Sonic a Completion Ticket 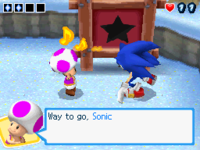 A mission board with a black star

A Completion Ticket is an item that appears in Mario & Sonic at the Olympic Winter Games for the DS. It is given to the player by a White Shy Guy in Frostown if the player loses at an event a certain amount of times. To use it the player must press the

on the mission attempt screen. When used, the mission will be skipped automatically. If the Completion Ticket is used on a boss, they will react differently. After using a completion ticket, the mission board will display a black star, instead of the usual silver or gold stars.