It has been requested that this article be rewritten. Reason: Overly long paragraph makes it hard to read. 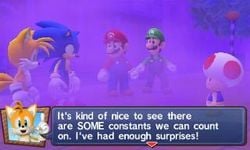 Mario, Luigi, Toad, Sonic and Tails in the purple Phantasmal Fog at the British Museum.

The Phantasmal Fog (also referred to simply as fog) is a type of colored fog produced by the fog urn that appears in the Nintendo 3DS version of Mario & Sonic at the London 2012 Olympic Games. In the game's Story Mode, Bowser and Dr. Eggman attempt to use the fog to prevent the Olympic Games from happening after not receiving invitations. The fog comes in seven different distinct colors plus a rainbow colored variant, and is spread using fog machines and the fog amplifying system.

The Phantasmal Fog was originally located alongside the fog urn at an ancient ruin site, where its ability to produce imposters was used as a curse to deter looters, though was stolen around 300 years before the events of the game by the pirate William Kidd who used a magical seal to keep the fog within the urn and remove it from the ruins. When Dr. Eggman got hold of the urn, he designed the fog amplifying system to allow him to partially open the seal and release the Phantasmal Fog, but later got Bowser to have a Magikoopa fully break the seal to allow the fog's power to be fully utilised. He then had Omega transport the urn back to him after the fog was released, and then proceeded with his plan to use it to stop the Olympic Games.

In the story mode, the fog first appears in The Night Before, where Bowser and Dr. Eggman first use the fog amplifying system and fog machines to produce blue fog at the Olympic Stadium, which scares off the characters setting up for the opening ceremony and creates the first imposters. Mario and Luigi investigate the fog alongside Toad and Omochao in Stadium Blues, finding out that the fog lifts when imposters are defeated, and manage to clear it from the stadium by breaking the fog machine in Foggy Foes, as well as finding out that it is something to do with Bowser. At the end of the episode, they notice that pink fog has appeared over Hyde Park and head there to investigate. Daisy and Amy come across the fog and a group of imposters in Morning in Hyde Park, and Peach, Blaze and a group of Toads also encounter the same thing, and follow the purple Toad's lead about seeing a bat around to find the cause. In The Mysterious Thief, they encounter Rouge who initially tries to trap the group in the fog, though after being defeated in an event is discovered to have been brainwashed by the fog. She leads them to a fog machine, which they break to clear the fog from the park, and reveals that Dr. Eggman has something to do with it at the British Museum when Mario, Luigi and Toad arrive. In Sonic Arrives, red fog appears at the Tower of London along with a pair of imposters, which Sonic and Tails defeat and also find out that the fog thins when they disappear, and in The Ghostly Tower, the pair destroy the fog machine and clear up the fog, concluding that Bowser is responsible as Boo and King Boo were guarding the machine. Orange fog appears around Tower Bridge and prevents it from being lowered in The Blocked Bridge, and after Yoshi defeats a pair of imposters, Sonic and Tails share their conclusions with Yoshi, Shadow and Silver and search for the fog machine. The machine is found with Jet's help being guarded by Bowser Jr. in The Wind Master, and after Bowser Jr. is defeated in Enter Bowser?!, the machine is destroyed and the fog is cleared, and Bowser Jr. accidentally reveals that Dr. Eggman is also partially responsible for the fog. Jet mentions that there is still fog elsewhere in the city, and Sonic and Tails head to the British Museum to investigate it there. Mario, Luigi, Toad sonic and Tails encounter purple fog at the British Museum in Mario and Sonic and find out that they have all made similar conclusions about it, and clear it away by destroying a fog machine in The Secret of the Fog, while Tails manages to find out some of the history behind it. Wario encounters yellow fog at Eton Dorney in Wario's Scheme, and attempts to clear it up by trying to destroy the fog machine, which is revealed to be a 3D hologram. Wario later manages to clear up the fog with Waluigi's help by destroying the real fog machine in Stop Dr. Eggman!. Sonic, Knuckles and Vector find green fog at Horse Guards Parade, and clear the area by destroying the fog machine there. In Clear Skies Again, the groups reunite in the Main Stadium and reveal that they have managed to clear the Phantasmal Fog from all of the sites across London, and therefore the Olympic games can now be held. Bowser and Dr. Eggman find out that the fog has been cleared, and Dr. Eggman decides to cover London in fog again by using the fog amplifying system's newly added turbo button. The Phantasmal Fog turns out to be more powerful than Dr. Eggman first thought and breaks the machine, causing more powerful rainbow-colored fog to cover and London and power up Bowser and Dr. Eggman. The group at the stadium find that the fog has returned without fog machines in A Rainbow In Fog, though note that it is different and now produces more powerful imposters. Omochao notes that they will now have to clear the fog simply by defeating the imposters that it produced. In To the Ruins!, it is found that the fog has spread as far as Stonehenge, and after more of Omega's memory banks are restored, he reveals more of the urn's history based on what Dr. Eggman had sent him to at Stonehenge. On their way back to Big Ben to confront Bowser and Dr. Eggman in The Promise to Toad, Toad and Omega have to leave the group as the prolonged exposure to the fog is causing Toad to struggle to breathe and damage to Omega's circuitry. Mario, Luigi, Sonic and Tails confront Bowser and Dr. Eggman, who have both been powered up by the fog, in The Grand Showdown, and find out that the other characters have managed to clear the rest of the fog from London. After Bowser and Dr. Eggman are defeated, Mario uses the urn to clear up all of the fog and Sonic reseals it using its lid, causing Bowser and Dr. Eggman to lose their enhanced power in the process. Grey fog appears inside Big Ben in The Fog Returns when Dr. Eggman partially unseals the urn, before explaining the history of the fog to Orbot, Cubot and Metal Sonic.

The Phantasmal Fog has many traits associated with it, most notably the ability to create imposters that take the form of the person that the one holding the urn is thinking of. However, the fog is weakened when the imposters are defeated, though is thickest around the imposters. The fog also appears to have the ability to brainwash those who breathe it in and temporarily wipe their memory, and also to allow those who breathe it in to alter their voice. The denser rainbow-colored fog comes with several additional traits of creating stronger imposters, powering up those who breathe it in, and also causing breathing difficulties with prolonged exposure. While robots are immune to most of these effects, circuitry damage can be cause by spending longer amounts of time in the rainbow-colored fog.