? Panels (originally known as Question Blocks)[1] are the ground-based version of the ? Block. While ? Blocks hover in midair, ? Panels lie flat against the ground. These objects first appear in Super Mario Kart. ? Panels are replaced by floating Item Boxes in Mario Kart 64 and future Mario Kart installments.

Yoshi about to drive over a Question Block 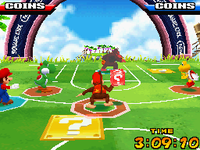 Diddy Kong near a ? Panel in Mario Hoops 3-on-3

? Panels reappear in Mario Hoops 3-on-3, now with an updated design matching the current design of ? Blocks. These panels are scattered across the game's various basketball courts. When a player on offense dribbles the ball over a ? Panel, they typically acquire Coins used to boost points, in which case the ? Panel glows when each coin is collected per dribble on them; they may also receive an item that pops out from them. Unlike Super Mario Kart, a ? Panel disappears when it is deactivated. A player on defense always receives a special item if they run over one of these panels. Fake ? Panels also appear in the game and can be used to trip up other players. Purple ? Panels appear in the Jr. Street stage when one of the spotlights shines on the ? Panel. Those contain Slot Coins.

Princess Daisy running towards a ? Panel in Mario Sports Mix

? Panels return in Mario Sports Mix. They have the same effect as in Mario Hoops 3-on-3.

? Panels reappear in Mario Party 9. They appear in Fungi Frenzy where the players try to earn the highest score by ground-pounding panels with Mushrooms in them. Before each of the three rounds, the panels will briefly show what they contain. Points in this game are solely based on the number of Mushrooms a player collects. Some panels will contain one Mushroom, others contain two, and the rest contain three. Players can stun each other by ground-pounding them. After three rounds, the player with the highest score wins. Deactivated ? Panels are updated matching the current design of Empty Blocks.

? Panels reappear in Paper Mario: Color Splash in the mini-game Flippin' Cards! In it, Mario uses his hammer to flip the ? Panels to find matching pairs of Battle Cards. The ? Panels appear in a rectangular card shape with brown borders.