Not to be confused with Peeper or Peeka.

Peepas are Boo-like enemies debuting in Super Mario 3D Land. They are small, white ghosts with stubby arms, black eyes with white pupils and a permanently smiling mouth which shows its two teeth. As ghostly enemies that have an appearance different from most Boos and often travel in predetermined paths, Peepas are somewhat similar to the Eeries in Super Mario World.

Peepas are exclusive to the Ghost Houses found in the game. These enemies are usually found alongside Boos. Peepas do not directly attack Mario or Luigi when they get too close, but rather stay in a stationary position or move in a set area, making them more of an obstacle rather than an enemy. Sometimes, several Peepas encircle a select area similar to the Octoboos in Super Mario Galaxy 2. A Peepa can only be defeated by running into it while under the effects of a Super Star.

Also, in World 3's Ghost House and other Ghost House based levels, Peepas carry moving yellow platforms. They appear when Mario stands on one of them. They will move along with the platform tracks if there is any. Sometimes they will tilt the platforms and also they may disappear at the end of a track, causing the platforms to disappear as well. These platform-carrying Peepas do not hurt Mario or Luigi if they touch them, unlike the circling Peepas.

Peepas reappear in Super Mario 3D World and Super Mario 3D World + Bowser's Fury. Unlike in previous games, they can be defeated by the light of a Light Box. Here, they make a unique distorted sound effect when defeated. This is also the first game where Peepas are shown with an expression other than their usual grin; as they make a terrified face when they are being illuminated by a Light Box.

Peepas reappear in Super Mario Maker 2, where they are placeable enemies in the Super Mario 3D World style. Much like in New Super Mario Bros. 2, they act like the Boo Buddies, which are present in the other game styles. 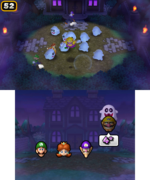 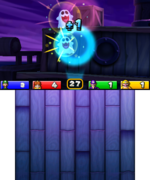 Peepas made their Mario Party series debut in Mario Party: Island Tour. They replace Red Boos from previous games. In the minigame Get Reel, a few can be seen inhabiting the corridor, where they end up chasing Mario. They also appear in the minigames Horror Harriers and Peep a Peepa, where players have to avoid them and shine a light on them, respectively.

Peepas make an appearance in Mario Party 10 as the main obstacles in the four-player minigame Peepa Panic.

Peepas reappear in Mario Party: Star Rush. They serve as the primary obstacles in World 2-2 and World 2-3, where they masquerade as a duplicate ally. When players take them, they reveal themselves and hinder the party with their Cursed Dice Block, which rolls only 0's and -1's. Players cannot select to play as a Peepa, and they disappear after a set amount of time. They additionally appear in the minigames House of Boos and King Boo's Light Smite, where they travel in straight lines. They grab players and bring them to the beginning if players run into them.

Peepas appear in Super Mario Party as non-playable characters. When the Peepa Bell is used, a Peepa appears and chases a chosen player to take a coin from them each time they move.

Various Peepas appear in the Horror Land game board of Mario Party Superstars.

Peepas appear as enemies in Captain Toad: Treasure Tracker and its Nintendo Switch and Nintendo 3DS ports, behaving the same way as in Super Mario 3D Land and Super Mario 3D World. They can be defeated if Captain Toad or Toadette shine their headlamps on them for long enough. Additionally, using a Double Cherry to shine two headlamps on a Peepa will defeat it much faster, within a quarter of a second.

It has been requested that more images be uploaded for this section. Remove this notice only after the additional image(s) have been added.

A Peepa appears in volume 46 of Super Mario-kun. It encourages a Tail Boo to scare Mario. At the end of the chapter, the Peepa gets buried by an avalanche along with the Tail Boo, the Tail Boo's father, and the Bros.

Peepas make their debut in the Mario Tennis series with Mario Tennis Aces and appear as spectators in the court Mirage Mansion.

Image of a Peepa from Dr. Mario World

Peepas appear as assistants in Dr. Mario World. Their stage mode effect increases the player's base score for every green virus that is eliminated. Their versus mode effect grants a chance one of the viruses that appear is transformed into an exploder when all viruses in the player's play area are eliminated. The amount of points gained and the chance of an exploder appearing are increased at higher levels, starting from 50 points and 20% respectively to 200 points and 100% respectively. Peepas also appear as background objects in World 4 when all stages are cleared.

Peepas were going to appear in Mario & Luigi: Paper Jam, but they were removed from the game for unknown reasons; however, the unused Peepa graphics can be found with the Boo graphics.