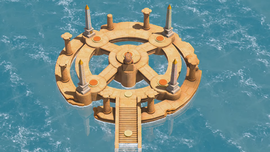 Ruins of Trials is a bonus world featured in version 2.0.0 of Mario Tennis Aces, located south of Marina Stadium. It is set in desert ruins, and is the only world in the game that is also not a court playable in multiplayer mode.

In Adventure Mode, the Ruins of Trials is visited after Mario defeats Bowcien for the first time. After Mario clears all of the missions in the world, he is awarded with a Lucien replica that can be used in multiplayer matches.