Not to be confused with Spin Jump, Spin Attack, Spin Dash, or Drill Spin. 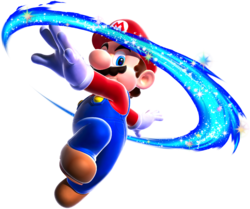 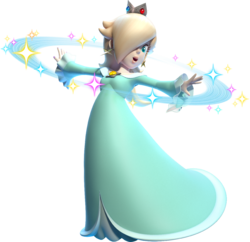 Mario breaks crystals by spinning into them.

Spinning is done when the player shakes

. In Super Mario 3D All-Stars, it can also be performed by pressing

. In addition to being a main method of attacking enemies, performing a spin is the only way to activate Launch Stars, which let Mario fly through the cosmos like a comet and reach new planets and galaxies, making it a vital move throughout the game. It can also add some height to his jumps, deflect certain projectiles, activate switches, break crystals, let him swim faster, and even pick up certain items that are nearby. However, once Mario performs a spin, he must wait a short period for Baby Luma to return to his hat before he is able to spin again, with Luigi's wait time being slightly longer. Also, he can spin only once in midair, as Baby Luma returns to his hat after he lands on solid ground.

Mario gains this ability after being entrusted with Baby Luma's care. Here, spinning is one of Mario's few attacks, with the ability to stun, freeze, or make enemies dizzy by spinning into them. This gives Mario a chance to escape or attack the enemies. Spinning is needed to defeat some bosses. Spinning also causes Mario to skate on icy surfaces. By combining this move with a long jump, Mario can chain a spin into a double kick, and if he spins in midair and immediately ground-pounds, he automatically homes in on nearby objects or enemies.

Occasionally, spinning is used to activate or use several power-ups, including the Fire Flower and the Red Star. Although not necessary for it to work, spinning while the Ice Flower is in effect causes Mario to skate across water instead of walking, and spinning while the Boo Mushroom is in effect causes Boo Mario to become invisible for a short time. Spinning cannot be performed as Spring Mario.

Bowser uses a spin on Mario.

It also appears that after his first defeat, Bowser uses the power of a Grand Star to attack Mario with a move similar to Mario's spin. Mario is able to negate this spin by performing one of his own.

Spinning returns in Super Mario Galaxy 2, functioning largely the same as it did in the previous game. Mario once again gains this ability after finding Baby Luma at the beginning of the game. Mario can spin near Yoshi to ride him without having to jump on him, and when he rides Yoshi, the spin becomes a Head Shake, which has the same effect as a spin, except it cannot be used to give him extra height while jumping. The ability to attract coins and Star Bits from the previous game is removed due to the absence of the Red Star, but Mario can still attract shells by spinning.

In addition to the returning power-ups utilized by spinning, it is also used to activate the Cloud Flower, the Rock Mushroom, and the Spin Drill.

. Like in the Super Mario Galaxy games, the move allows her to gain a bit of extra height when used in midair. It is possible to spin multiple times in one jump, though only the first spin gives Rosalina the extra height. Because Rosalina does not need Baby Luma to do it, the delay between the spins is reduced. As in Super Mario Galaxy and Super Mario Galaxy 2, Rosalina is able to stun or defeat an enemy. She loses the ability if she grabs a power-up (bar the Super Mushroom, Super Star, and Double Cherry).

In the 4x100m Relay event featured across multiple Mario & Sonic games, Mario's special boost is highly reminiscent of the spin from Super Mario Galaxy. For instance, in Mario & Sonic at the London 2012 Olympic Games, Mario spins while creating a translucent blue trail to gain a burst of speed. In the Wii U version of Mario & Sonic at the Rio 2016 Olympic Games, the spin additionally creates sparkles around the character, making the resemblance more prominent. Luigi and Amy also spin in their 4x100 Relay special boosts, but the trails they leave are green and magenta, respectively, isolating Mario's special boost as a reference to the Super Mario Galaxy move.

In the Dream Ski Jumping event of the Wii version of Mario & Sonic at the Olympic Winter Games, Mario's special action is a spin that surrounds him with a sparkly blur, similarly to the spin from Super Mario Galaxy.

In the Dream Spacewalk event of the Wii version of Mario & Sonic at the London 2012 Olympic Games, the characters can perform a spin, here referred to as a Spin Attack, to deflect Dino Piranha's fireballs.

In Super Mario 3D Land and Super Mario 3D World, the Tanooki form's tail whip acts like a Spin, but does not give any extra height in midair, has little delay between spins, and can be used continuously while crouching.

In Captain Toad: Treasure Tracker, spinning is done in the same vein as the Spin Jump from Super Mario 3D World, rather than the Spin that is seen in the Super Mario Galaxy games. To make Captain Toad or Toadette spin around, the player has to quickly rotate the analog stick. While spinning, the characters become dizzy and immobile for a brief moment; however, if timed correctly, the move also enables them to defeat enemies that come into contact with them, serving as an alternative form of attack from stomping, throwing Turnips, or using a Super Pickax.

Spinning is technically possible in Super Mario Odyssey by way of the Cap Throw move. It behaves the same as a Spin, only damage is now done through Cappy as a projectile. The Spin Throw move is also similar to the Spin; however, it has no benefit to Mario's jumping and has a much wider radius. Mario can also do a little spin by jumping right when Cappy returns to him to gain a little height.