Not to be confused with Melty Molten Galaxy.

Melty Monster Galaxy is the first galaxy of World 6 in Super Mario Galaxy 2. The galaxy is completely covered in lava, with a magma tide that rises and falls every so often. The main obstacle here is the magma and its tide. As the name suggests, the most common enemies in the galaxy include giant lava monsters known as Magmaarghs and Magmaws. However, Octogoombas, Li'l Cinders, and Pinheads are also found.

This galaxy does not have a Prankster Comet until the player unlocks the Green Stars.

NOTE: Unless otherwise noted, all names are unofficial.

Mario on the Starting Planet.

Mario arrives in this galaxy on a small concrete platform floating in the void. On the platform, there is a Warp Pipe that sends the hero to the Bowling Lane area.

Mario using the Pull Stars to get past among the Magmaargh Planets.

Near the starting platform, there is a group of five small lava-covered planets that Mario cannot reach. Magmaarghs are the only creatures that inhabit these planets, lurking in the lava and attacking by surprising their prey. A set of Pull Stars are found among the Lava Planets in the first mission, The Magnificent Magma Sea. The player must carefully navigate the Pull Stars while avoiding the Magmaarghs to reach the Launch Star. The Launch Star takes Mario to another Launch Star which the player must quickly use to avoid a lunging Magmaargh.

Mario using a tornado on the Magma Sea Planet. 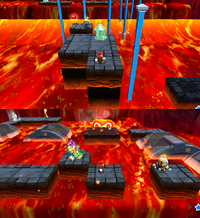 Mario on the Magma Sea.

This planet has many volcanoes on its surface, and there is a river of lava where Mario lands. Waves of lava can cover some low platforms, so the player needs to reach higher ground to be safe. Octoombas, a Li'l Cinder and a single Magmaargh roams this planet. Near the river, there are also tornadoes that Mario must use to make his way up a lava fall.

Mario near the Magmaw Planet.

This isolated planet looks similar to the Lava Planets, but it has a small field of asteroids surrounding it. Mario can only access these asteroids. Even though they are very close to the surface of the planet, the gravity of the lava planet does not affect Mario, as he can run all around on the asteroids. The planet has several Magmaws moving around. Their mouths are open as they move, engulfing the asteroids temporarily and burning Mario. Another Magmaargh is found here hidden among the Magmaws. A Comet Medal is found on one of the asteroids, and a Crystal located on the planet contains the mission's Power Star.

Mario taking the ramp to the Launch Star that will take him to Rolling Lane.

Mario near the beginning of the Rolling Lane.

Mario near the end of the course.

This zone is a long path where the Rock Mushroom is used. This area has many platforms, some of which are separated by large voids. The Rolling Lane is an area that only Rock Mario can pass, as the zone has jump ramps that only Mario in his Boulder form can use to cross the gaps and reach the platforms. A few sections of the road are protected by rubber fences, and if Rock Mario rolls towards them, he will rebound back.

Rock Mario bowling over Pinheads in the Bowling Lane.

The Chimp grants Mario a Power Star for clearing his challenge.

The Bowling Lane is a special area that Mario can only reach via the Warp Pipe found on the starting planet. This area is sort of similar to the Rolling Lane. Mario must use the Rock Mushroom to play a bowling game, earning points by smashing Pinheads, the only enemies found on the planet. The Chimp, who is in charge of the game, is found here. If Mario walks over the blue line, it will be a foul, and the Pinheads will disappear until Mario steps back again.

This Green Star is located between two lava planets, above the Launch Star. Mario must quickly use the last two aligned Pull Stars once the Magmarrgh passes by, grabbing onto the last one. If the player lets go before Mario is in the center of the Pull Star, he will have enough speed to make it past the Launch Star and to the Green Star.

Luigi about to get the second Green Star

This Green Star is located on the Magma Sea Planet. At the end of the tornado path, Mario must grab the vine, get maximum momentum, and jump to the Green Star. It is also possible, to get to the Green Star without the vine by using the last tornado but it is much harder that way.

Alternatively, Mario can go to the end of the course, where the normal Power Star waits. Crashing into the lone block in the far left corner turns Mario back to normal, and he can then Long Jump back to the N-shaped platform by standing on the fence. This makes it much easier to collect the Green Star, either by precision jumping or by lining up the trajectory for his Rock form.

Melty Monster Galaxy's music incorporates Super Mario Galaxy's main theme. The theme is featured as a track in Super Smash Bros. Ultimate, which also has the slightly longer opening from the soundtrack version.