Lava Geysers[1] are obstacles that rise up from pits of lava. They act similarly to Water Geysers and Sand Geysers, with the biggest difference being that the player cannot walk on top of them and takes damage if they attempt to do so.

Lava Geysers are first seen in Mario vs. Donkey Kong. They can lift moving platforms up into the air, allowing Mario to reach higher ground and they make a splashing sound before they rise. They only appear in a few levels of the third world, Fire Mountain. 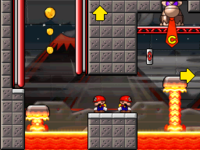 Variants of Lava Geysers known as Lava Fountains[2] appear in Lava Dome in Mario vs. Donkey Kong 2: March of the Minis. They carry platforms known as Lava Rocks,[3] which are partially submerged in lava and move slowly from left to right. Minis can board Lava Rocks to move across lava without being harmed, similarly to rafts from Tropical Island. If a Mini boards a Lava Rock, it remains standing on the Lava Rock until its direction is changed by swiping left, right, or up across the Mini using the

In the Construction Zone, Lava Rocks can only be used in the Lava Dome construction kit. However, the Lava Fountains below them do not erupt, meaning all Lava Rocks in custom levels behave identically to rafts.

In Donkey Kong Jungle Beat, Lava Geysers first appear in Grim Volcano. If Donkey Kong touches one, he is knocked back to the platform he was previously on and the camera focuses on him as he briefly clutches his bottom in pain. The same occurs when touching normal lava.

Lava Geysers appear in Super Mario Galaxy, where they are seen in areas such as Melty Molten Galaxy and the lava-based portion of Bowser's Galaxy Reactor. 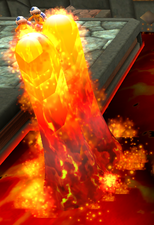 In Super Mario 3D Land, Lava Geysers appear in the castle levels. They are often seen elevating platforms into the air, allowing Mario or Luigi to reach higher places, and emerging through grated platforms as hazards. In World 8-

2, Lava Geysers propel the Spine Coaster into the air towards the end of the ride. There are also many Lava Geysers that appear out of the way solely for aesthetic purposes, although they can still damage Mario or Luigi should they jump into one.

Lava Geysers reappear in Super Mario Odyssey, where they are found in the Underground Moon Caverns in the Moon Kingdom. If Mario touches one after capturing a Parabones, the Parabones disappears. Pink Lava Geysers also make an appearance in the Luncheon Kingdom, which can levitate Mario as a Lava Bubble.

Lava Geysers in the background of N64 Bowser's Castle

Lava Geysers make their first appearance in the Mario Kart series in Mario Kart Wii, where they first appear in the game's new Bowser's Castle. They appear towards the end of the track, rising up from a grated portion of the track. If the player touches them, they spin out. They also appear in the background as well as on a jump towards the end of the retro N64 Bowser's Castle. Lastly, they appear in the background of Grumble Volcano, where they rise up after certain portions of the track sink into the lava.

Lava Geysers are also objects in two K'NEX building sets based on Mario Kart Wii, where they are referred to as Lava Plumes.

Lava Geysers make another appearance in Mario Kart 7 in the game's Bowser's Castle and the retro battle course N64 Big Donut. They erupt from the lava pits in front of ramps, causing any racers to spin out if they jump into them.

In Mario & Sonic at the Sochi 2014 Olympic Winter Games, Lava Geysers appear in the backdrop of he Bowser's Castle segment of Mario's Figure Skating Spectacular.

Lava Geysers make their debut in the Yoshi franchise in Yoshi's Woolly World and its port, appearing in Lava Scarves and Red-Hot Blarggs and Vamoose the Lava Sluice!. They behave the same as they do in previous games.

Lava Geysers return in Yoshi's Crafted World, appearing in Poochy's Magma Run and Mr. Geary's Factory. They behave as they do in past installments.