Not to be confused with Moe-Eye. 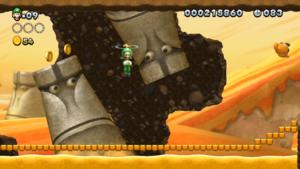 Luigi near a few Stone-Eyes in The Walls Have Eyes

Stone-Eyes are giant gray stone heads that debuted in New Super Mario Bros. U. They appear to be based off of the moai of Easter Island, and have faces similar to those of Bomps.

In New Super Mario Bros. U, New Super Luigi U and New Super Mario Bros. U Deluxe, they mostly inhabit desert-themed levels, and either move in numerous different patterns (e.g. swaying, up and down, to the left or right, etc.) or are completely stationary. Based on their movement patterns, they can assist and/or hinder players. A small Stone-Eye can be seen in the Records Toad House on Secret Island.

Some Stone-Eyes can be moved by Ground Pounding on top of them; this is often necessary to reach things such as Star Coins or paths to secret exits. They have their eyes fixed on the player when approached; if the player performs a Spin Jump, their eyes will roll around for a moment. There are also brown-colored, rectangular Stone-Eyes with their eyes closed that serve as stationary platforms. In New Super Luigi U's Spinning Sandstones, one of them resembles Luigi.

A Stone-Eye figure appears in the background of the purple Toad House located at Secret Island.

Stone-Eyes reappear in the background of desert levels in Super Mario Run.

In Super Mario Maker 2, Stone-Eyes can be seen again in the background of New Super Mario Bros. U-styled desert courses. As of version 3.0.0, Stone-Eyes designed in the style of Super Mario World may appear on desert-themed course icons in Super Worlds.

Stone-Eyes in the Balmy Dunes course

In Mario Golf: Super Rush, Stone-Eyes appear in Balmy Dunes. In Golf Adventure, there is a mission where the player needs to shoot golf balls into a pot placed on top of a Stone-Eye's head.

Stone-Eyes appear Mario Party 10 in the Fruit Scoot Scurry minigame. They serve as platforms that players can jump between to collect fruit.

Stone-Eyes appear on the map of World 2 in Dr. Mario World once it is completed.