Ice Mario is a form that Mario takes upon touching an Ice Flower, granting him ice-related powers. It is often viewed as a parallel to Fire Mario. A vastly different form of the same name appears in Super Mario Galaxy.

The Ice form gives Mario, Luigi, Blue Toad and Yellow Toad the power to shoot Ice Balls, just like with the Ice Flower Bros. Item in Mario & Luigi: Partners in Time. In this form, Mario's overalls turn red, while his cap and shirt turn cyan, similar to Fire Mario (likewise, Luigi and the Toads have their own take on this appearance).

This form is not to be confused with the Penguin form, as that form has more abilities. In addition to throwing Ice Balls, Penguin characters can slide on their bellies (destroying breakable blocks and enemies in the way), swim with much more control and agility, and walk/run on ice without skidding. The Penguin Suit itself is rarer than the Ice Flower.

Ice Balls can be used to take out Larry, Iggy, Morton, Roy, Ludwig, and Kamek's magical fireballs, as well as Bowser and Bowser Jr.'s fireballs. However, they cannot hurt nor freeze the bosses. Normal enemies will be trapped in ice cubes when hit by an Ice Ball. They will eventually try to free themselves, but the effect of this varies from enemy to enemy. Some will die after breaking free, releasing coins, but others can free themselves without taking damage. If the player lifts a frozen enemy, they will never break free as long as they're being held.

The frozen enemies can be ground-pounded to defeat them. Many frozen enemies can also be defeated by lifting and throwing them, which makes them slide in the direction they were thrown, defeating other enemies in their path until they shatter on a wall or fall of a cliff. Even unbeatable enemies like Dry Bones can be destroyed after being frozen and will not revive. However, some enemies and obstacles, like Thwomps, are so solid that Ice Balls cannot freeze them. Other large enemies, such as Porcupuffers and Big Piranha Plants, can be frozen, but will break out immediately and ultimately cannot be harmed by ice. Other enemies, like most other Piranha Plants and Sledge Bros., cannot be picked up. Flying enemies can be frozen in mid-air, allowing the player to jump off them, but after a while, their block will fall and break on the ground, defeating them.

Ice Mario makes a reappearance in New Super Mario Bros. U and New Super Luigi U, functioning identically. Miis can also make use of Ice Flowers to become Ice Miis. This time, most of the bosses can be frozen, but will break out immediately.

In the Nintendo Switch port New Super Mario Bros. U Deluxe, Toadette can also make use of Ice Flowers to become Ice Toadette. As Ice Toadette, she gains a pink-spotted cyan cap, cyan vest and pink pants while her dress remains unchanged.

As in the previous game, Ice Mario appears in Paper Mario: Color Splash as a Mario transformation by using a normal or Big Ice Flower card.

In Paper Mario: The Origami King, as in the previous Paper Mario games, Mario briefly takes this form when using a normal or Shiny Ice Flower in battle. 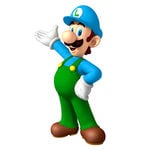 In Mario Kart Arcade GP DX, Ice Luigi appears as a downloadable alternate color scheme for Luigi. His special item is the Ice Ball, which can be thrown forward or backward. When hit, in addition to damage, the tires freeze and becomes unstable for a certain period of time.