It has been requested that more images be uploaded for this article. Remove this notice only after the additional image(s) have been added. Specifics: Images of each type of Magic Circle, activated and deactivated 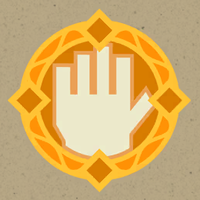 Magic Circles are special spots in Paper Mario: The Origami King. They are mainly used for activating the 1,000-Fold Arms, although they can also be used by Olivia if the circle has a Vellumental on it, provided that Mario has the necessary Bibliofold. Each Magic Circle disappears after a required action, using either the 1,000-Fold Arms or a particular Vellumental, is accomplished.

In the first phase of the final battle against King Olly, Olly has his own Magic Circles that he uses to transform into his versions of the Vellumentals. During the final phase, Mario has to arrange a picture puzzle of a giant Magic Circle with images of Olivia on it; Olivia turns into the Olivia Hammer and Mario is able to defeat Olly by hitting him with it.

There are also rock-paper-scissors versions of the 1,000-Fold Arms Magic Circles that only appear in the second phase of Handaconda's boss fight.