This article is about the species. For the Whale from Paper Mario, see Whale (character).

A whale is a large aquatic mammal. Whales' first appearance in the Mario franchise is Super Mario Bros. 2. 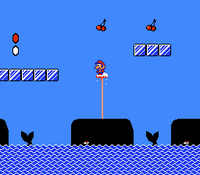 Whales appeared in World 4-2 of Super Mario Bros. 2. Players can hop on their backs and gain elevation by standing on their blow holes as water sprays out. The water will hurt the player if they touch it from either side but a Super Star can be used to destroy the spout. Pink (blue in remakes) Snifits and Shyguys patrol the backs of some whales. There is also one whale which has grass growing on its back. In the NES version, they are black with red eyelids, but in the SNES version and other subsequent remakes, they are purple.

In Super Mario Land 2: 6 Golden Coins, Mario has to go inside a whale (referencing Carlo Collodi's novel The Adventures of Pinocchio) and travel through it in order to reach and defeat the octopus and obtain one of the Golden Coins. 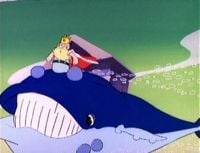 A whale from The Super Mario Bros. Super Show!

A whale briefly appears towards the end of The Super Mario Bros. Super Show! episode "Mario of the Deep". Here, King Neptune rides on the whale, and uses it to body slam his temple, which Barra-Koopa has taken over, along with the rest of Aqua Land. After slamming into the wall several times, the whale causes a piece of it to shatter away, which Mario, Luigi, Princess Toadstool and Toad are able to pass through. This whale appears to be a baleen whale rather than a sperm whale from Super Mario Bros. 2. 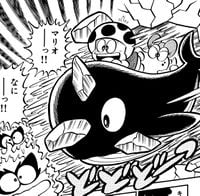 A whale in Super Mario-kun

In Diddy Kong Racing, two whales appear in Whale Bay. One of them breaches in front of a pirate ship and can be used as a ramp to get onto the ship. The other one simply swims around near the starting line. These whales atypically have two nostrils on the front in addition to blowholes. Any hovercraft driver can drive over any whale for a high jumping effect.

The whale from Paper Mario

An individual whale appears as a character in Paper Mario, where he aids Mario and his allies by getting them across the sea to Lavalava Island.

A whale in Paper Mario: The Origami King

Silhouettes of whales appear in Paper Mario: The Origami King in The Great Sea, spouting at regular intervals. When the player sails into a whale's spout, it raises Sea Captain Toad's boat up in the air for a short while, disabling its movement.

Whales appear in the microgames Blow Hole Bridge from WarioWare, Inc.: Mega Microgame$!, the WarioWare: Smooth Moves version of Tearful Reunion and Climate Control, and Stroke of Genius from WarioWare: Get It Together!. In Blow Hole Bridge, if Fronk runs into the water spouts blown by them, he will be defeated. In Levels 2 and 3 of Tearful Reunion, they appear as obstacles that block the path of a couple, while in Climate Control, some whales appear when the player beats the microgame. In Level 3 of Stroke of Genius, a whale replaces the island found in the microgame.

The whale in Mario Party 5

In Mario Party 5, there is a ? Space next to a gray whale in the board Undersea Dream where, if a player lands on it, they can allow the whale to blast them to another space, which will randomly either be the space right behind or right in front of the Star.

One of the multiple whales appearing in the optional level, Blowhole Bound, in Donkey Kong Country Returns.

In Donkey Kong Country Returns and Donkey Kong Country Returns 3D, whales appear in the level Poppin' Planks, where a whale jumps out of the water when a switch is activated and sends bananas out of its blowhole that disappear after an amount of time. Whales also appear in the level Blowhole Bound, where the player(s) can ride on the whales. After freeing a whale from an anchor, the player(s) can ride on its back to cross the water along the shore of the islands. The whales are not very steady and often tilt along the water, allowing the player(s) to grab some collectibles hidden out of reach. The whales sometimes head underwater as well, where the player(s) cannot swim, so the player(s) have to jump on floating ship parts to progress. These ship parts are often destroyed by the whales. By hand-slapping the whales' blowhole, the player(s) can force the whale to send water out that they can use to reach pickups in higher areas. The whales in the game look similar to a sperm whale.

Whales, possibly of the same species as those that have appeared in the previous game, also live in Sea Breeze Cove from Donkey Kong Country: Tropical Freeze. This is evidenced by their silhouetted presence in the background of Amiss Abyss.[1] However, they are only for aesthetic purposes, and cannot interact with the player.

A whale appears in Yoshi's Woolly World where it is made of blue silk and white plush cubes with yarn-knitted eyes. It is seen in the course Frozen Solid and Chilled; Yoshi can even skate on it like ice. If he activates the whale's blowhole, it'll spray from its blowhole a waterspout also made of yarn. The whale returns in Yoshi's Crafted World where one can be opened in Slip-Slide Isle to spray real water and another is displayed as a craft in Skulking Around.