Whale Bay is the first race course of the Sherbet Island area of Timber Island, the ninth main race track, and the eleventh track overall in Diddy Kong Racing and its remake, Diddy Kong Racing DS. Players can only race in the course using Hovercrafts, therefore making it the first course where the Hovercraft is the default vehicle. Being that it is unlocked along with the world itself, the player must have at least 10 Golden Balloons to enter the race, and 17 for its Silver Coin Challenge (or Balloon Touch Challenge in the Nintendo DS version).

This track is also seen in the intro where Timber goes under the tropical tree and Pipsy drives the opposite direction he goes. 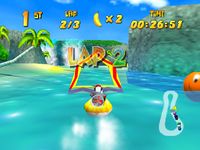 The track begins with a boost panel to the right and a u-turn to the left. On the outer part, players can drive behind a waterfall and collect bananas. In the inner part of the turn, there are Item Balloons of each color. After this, there is a long straightaway with a dash panel to the left. Players can access the top of the ship by riding on a whale. There are rainbow balloons there. Players can take the normal path, which curves to the left. Along the way, there are red and green balloons. On the outer edge, a dash panel can be taken, and players can collect bananas along the edge. After a sharp turn to the left (with a blue balloon on the left), players advance to the complete the lap.

Most of this course is done on water, but very small islands are scattered around with Weapon Balloons on them.

In the Nintendo DS remake, the beginning part of the track is under a cave. The original version does not have anything in this area, and so the player may skip it. It also seems to be more difficult to get on the top of the wrecked ship, as the whales appear to be smaller.