This article is about the vehicle from Diddy Kong Racing. For Funky Kong's similarly-named vehicle from Donkey Kong Country 3, see Hover Craft. 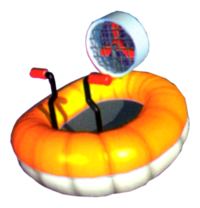 Hovercrafts are one of the three usable vehicles in Diddy Kong Racing and Diddy Kong Racing DS, the other two being Cars and Planes. Their main attribute is the ability to float across bodies of water, including lava due to their immunity to burn, and they can jump and go across ice that is too bouncy for cars. The hovercrafts are the default vehicle of those stages, which are the main theme of Sherbet Island. It is the only hub world where the character drives around in a Hovercraft. These vehicles can be driven in every stage, except for some boss fights and battle stages.

Hovercrafts are considered to be the trickiest vehicle to control, mainly because of poor steering capabilities. In the Nintendo DS remake, players can initiate a Rocket Start by blowing into the DS's microphone. 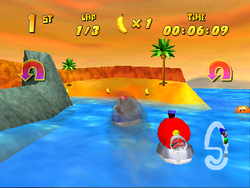 Diddy and T.T. race in Hovercrafts in Pirate Lagoon, a course where Hovercrafts are the default vehicle.

Hovercrafts are a usable vehicle in every course. However, they are only used as a default vehicle in three courses, two from Sherbet Island and one from Dragon Forest. The player races in a Hovercraft during two boss races, against Bluey the Walrus and Bubbler the Octopus; it is the only vehicle that is not used in a race against Wizpig. Darkwater Beach is the only Challenge Level where racers ride in Hovercrafts.