It has been requested that more images be uploaded for this article. Remove this notice only after the additional image(s) have been added. Specifics: Both N64 & DS versions

Not to be confused with Gloomy Gulch, which has been officially named "Haunted Forest" on one occasion.

The player must have at least 22 Golden Balloons to race on Haunted Woods, and 37 to unlock its Silver Coin challenge (or Balloon Touch Challenge in the Nintendo DS remake). The stage's default vehicle is Cars, but racers can use Hovercrafts after completing the course twice or via Time Trials. 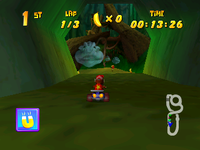 The course immediately has a right turn that leads into a medieval village, and a fountain. There are two paths around the fountain, but they both intersect with one another quickly. The track then leads into a long passageway and a castle gate, before heading into the woods. As the driver enters the woods, they are confronted with ghostly Wizpig heads, but the track soon loops around to a bridge leading back into the castle and then the finish line.