Hot Top Volcano is the first course to use a plane as a default vehicle. In Time Trials and subsequent races, the player is provided with an option to have the characters race in Hovercrafts. 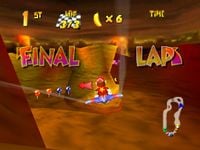 The start of the track.

The course begins with a sharp drop. There are two red balloons and two balloons only planes can reach. Some bananas are found behind the rock structure. Then, there are two tunnels; on the right, there is a blue balloon both hovercrafts and planes can reach. Hovercrafts fall into the lava after this. Planes can collect red balloons on the main left path, but they can also collect some bananas on a narrow corridor on the left.

Soon, there is a turn to the left, leading into another room. A green dinosaur roams in this room, being an obstacle. There is relatively rough terrain. Players can opt for balloons and dash rings on the sides of the room or for bananas in the middle. After an archway, racers complete the lap.

Like the other courses, Hot Top Volcano has eight Silver Coins scattered in its area in the Silver Coin Challenge of the original version. The player can access this challenge after winning against Dino Domain's boss, Tricky the Triceratops.