Treasure Caves is the fourth and final race course in the Sherbet Island area of Timber Island and the fourteenth overall race course in Diddy Kong Racing and its Nintendo DS remake, Diddy Kong Racing DS. The default vehicle for this course is the car, but after completion of the course or in a Time Trial, the hovercraft and the plane can also be used. Being one of the later tracks encountered, it requires sixteen Gold Balloons to enter, and later 22 for the Silver Coin Challenge (or Balloon Touch Challenge in the remake). In Diddy Kong Racing DS, Treasure Caves features no major differences in appearance but different music is played during the races. 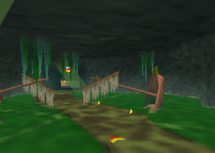 The track starts out on a wide bridge that curves around a waterfall, seen to the left of the road. A Zipper is placed on the right side of the road, and to the left of the large bridge are a few rock formations sticking out of the water. One of these rocks has a Power-Up Token on it, although it can be obtained by plane only. Another Power-Up Token is located in the air near the end of the bridge. A small tunnel is at the end of the bridge area of the track, and in it are three Weapon Balloons, two of which are red, and one that is blue. On the side of the wall near the tunnel's entrance is a separate tunnel leading to the next part of the course. It can be reached only by plane. On the other side of the tunnels, the road stretches under a large, bent rock connected to the wall.

An area of water is to the right of this, and a few palm trees surround the edge of it. There is a Zipper past the giant rock tunnel, and it leads between a few red and green Item Balloons into a wide cave. A long passage stretches into this dark cave, which is filled with some sunken ships. A strange, green goo surrounds the dirt road in here, and a few Item Balloons float in the air for pilots. The green goo can be driven on in a hovercraft in order to reach a Power-Up Token near a ship. The cave soon narrows into a tunnel consisting of a Zipper and a lone Power-Up Token, along with some bananas around the bend. Outside this tunnel is the end of the bridge found at the beginning of the race. The path on the bridge is straight and leads directly to the finish line.