Spaceport Alpha is the third track of Future Fun Land and the twenty-fourth overall course in Diddy Kong Racing and its Nintendo DS remake, Diddy Kong Racing DS. The track requires 41 Gold Balloons to be unlocked, but, once the track and the world boss are completed, it takes 45 balloons to play it again with the Silver Coin Challenge (Balloon Touch Challenge in the Nintendo DS remake). The plane is the standard vehicle for this course, but the car and hovercraft can also be used after it is completed twice or in Time Trials.

The course is set inside a large spaceport full of many high-tech devices. The course features two large rooms, one of which has a giant 64 on its floor (referencing the Nintendo 64). The track also features a powerful fan that can push the racers up through a narrow passage in a tunnel, along with a long room full of roadblocks and lasers.

In the Nintendo DS version of the game, Spaceport Alpha features several differences. While the course is set up in a very similar way, the second large room after the fan has a DS sign printed on its floor, instead of a 64, to reference the Nintendo DS. The lasers have also been removed, and the music has been replaced by a more high-tech theme, with the original theme being used for Spacedust Alley. 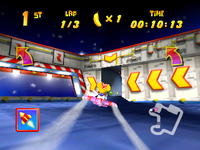 The track begins in a wide area. A small alcove in the wall to the right of the starting line holds a Power-Up Token, and four Item Balloons are placed farther ahead where the road becomes slightly skinnier. Another room is located after a small tunnel, and it features a small road for those driving cars. Around this thin road, the ground becomes slanted, and some Item Balloons and Power-Up Tokens are placed on it. Several gadgets are shown on the wall to the left, as well as a few pictures of Wizpig's head. A Zipper is located at the exit of a room, leading to a wide, empty room with arrows and windows on its walls. The arrows point to a narrow tunnel. The tunnel curves downwards, so racers in planes who do not travel straight down can easily run into the wall. At the bottom of the tunnel, a fan can be reached that pushes all racers back up through the other end of the tunnel. There is another large, empty room at the end of the tunnel, and it has a DS sign painted on its floor and some arrows pointing to another room on its walls.

Large windows are also around the walls with electrical currents going across them. In the next room, the walls are painted red, and arrows point to the exit of the small room to the right. A straight pathway makes up the next area, which is full of many large roadblocks, which are placed along the walls and in the center of the ground. Lasers also shoot from the walls in the original version of the game. Additionally, there is a variety of Item Balloons scattered place-to-place, as well as a few Zippers near the walls. At the end of the long room, a narrow tunnel is placed to the right. The round tunnel consists of a wall full of several shades of blue and some Item Balloons. The tunnel continues into a long control-room like area. On the windows to the left of the long room, one can see the outside of the spaceport into space. Some car Zippers are located along the ground of the area, along with a Power-Up Token and some Item Balloons. Outside of the tunnel is another car Zipper, taking racers to another wide area. Bananas (or Rareware Coins in the DS version) line up along the walls here, and to the left of this area is the finish line.