Frosty Village is the fourth and final track of the Snowflake Mountain area of Timber Island, the eighth main race track, and the ninth track overall in Diddy Kong Racing and its Nintendo DS remake, Diddy Kong Racing DS. A minimum of 9 Golden Balloons are required for racing on the course, and 16 for the Silver Coin Challenge (Balloon Touch Challenge in the remake). As its name suggests, Frosty Village takes place in a snowy village downhill, as well as some cave segments. There is also freezing water that bounces racers upward. The car is the default vehicle for this course, but the hovercraft or plane can also be used either upon its completion or during a Time Trial.

Part of the music for this course bears a resemblance to the Christmas song "Winter Wonderland". 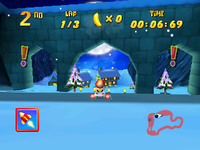 In Diddy Kong Racing DS, several rock spikes were removed from the mid-part of the level. This makes the shortcut slightly easier to take. Fences and more houses and streetlamps are added throughout the track.