The player needs a total of 39 Golden Balloons to open this course (37 in the remake), and later 43 for its Silver Coin challenge (or 42 for its Balloon Touch Challenge in the Nintendo DS remake). The stage's default vehicle is planes, but racers can use Cars or Hovercrafts after completing the course twice or via Time Trials. 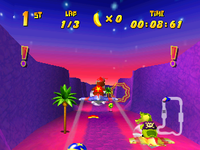 The course starts with a meteor bouncing around, as the player drives their plane across the landscape, passing through zippers and also avoiding trees. The player then enters a tunnel, that has some electrical beams that spin a character out if they collide with it. The tunnel leads to a small grassy area with one of Wizpig's spaceships. The spaceship tries to shoot the player, and they'll spin out if they're hit by one of the laser beams. The track then goes back into a tunnel, before leading to an open area with a fork in the road, where the player may either take a bridge or go under it, with both ways having a zipper. Both roads lead into a cave, with several rock formations, before the player exits the cave and crosses the finish line.

In the Nintendo DS remake, the track mainly remains the same as the original, although Wizpig's ship is a bit easier to avoid. Trees in the beginning are also replaced by lighthouses, and the music is changed to the theme from Spaceport Alpha.