It has been requested that more images be uploaded for this article. Remove this notice only after the additional image(s) have been added. Specifics: Both N64 & DS versions

Windmill Plains is the first race course in the Dragon Forest area of Timber Island and the sixteenth overall race course in the games Diddy Kong Racing and its remake, Diddy Kong Racing DS. Being that this track is unlocked along with the world itself, it requires 16 Golden Balloons to be unlocked, and later, 23 balloons are needed to unlock the Silver Coin Challenge (or Balloon Touch Challenge in the Nintendo DS remake).

This level is notable for its many windmills, which serve as obstacles throughout the stage. The track has a country theme, and it is surrounded by bright green mountains. The road is mostly flat and there are a few long tunnels that can be found in the race. Some areas of the track are also surrounded in water, so players driving in cars have to be careful. Luckily, the track's standard vehicle is the plane, so racers can usually just fly over the watery areas. Also, upon the course's completion or during a Time Trial, along with the car, the player has the option of using the car or hovercraft. 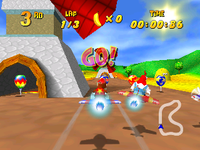 The beginning of the track is covered by a few tall windmills on a wide road. Under these windmills are a few Item Balloons, which can be collected to gain items. Zippers can also be found under them to give the racers am extra speed boost. Trees are located around the road, however, they are not much of a hazard for players, as they are small and spaced apart. The track soon curves downwards into an area surrounded by water. On the way down, players can find a group of Item Balloons, as well as a Zipper for pilots. The area surrounded by water is covered by two small trees, which are unlikely to cause any harm to experienced racers. A tunnel can be found at the end of this area, which has a few turns in it. In the outside of this tunnel, a few Item Balloons can be found just before a Zipper.

This Zipper can boost players to another windmill. A car Zipper is in the windmill for drivers, while a few Item Balloons can be found outside of the windmill for pilots. Right after the windmill is a small tunnel leading to another area surrounded by water. The track can be a little tricky for drivers to get through, as it is quite thin and is filled with some twists and turns. A few trees can also block their way. For pilots, a Zipper can be found high in the air for a speed boost, leading players into a small valley. This valley is rather plain, but has a few Item Balloons floating around. Eventually, racers can come up to a wider area, filled with several trees, as well as a car and plane Zipper. Another long tunnel is at the end of this area. It is filled with no obstacles. Outside of this final tunnel, the finish line can be seen. Heading straight down the pathway can take the racers through it.