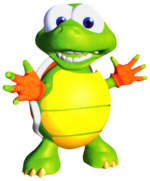 Tiptup is a playable driver in Diddy Kong Racing. He helps Timber, Pipsy and the others defend their home island from Wizpig. The pig tyrant flies back to his home planet, Future Fun Land, after being defeated by Tiptup and his friends. Tiptup and his allies follow, and defeat Wizpig for a second time. Tiptup's instrument theme is a xylophone or marimba.

Tiptup is one of only two lightweight racers, with the other one being Pipsy. His vehicles have very high acceleration attributes and good turning abilities, but their speed is rather low. His top speed without bananas is 54.67 mph.

Tiptup also appears in the remake to the original, Diddy Kong Racing DS. He has a higher pitched voice in the game, and his characteristics are very slightly altered from the original game.

Tiptup in Mario no Bōken Land

Tiptup makes a small, non-speaking cameo in the Diddy Kong Racing segment of, Mario no Bōken Land, titled "Go Go Diddy!". He is shown to be competing in a race, in third place.