Alena is a character from Dragon Quest IV: Chapters of the Chosen and a playable character in Itadaki Street DS. She is the Tsarevna (princess) of Zamoksva and is also known as a superb martial artist. Alena has been depicted to being a "tomboy" in terms of her personality. After Alena's first appearance alongside the Mario franchise characters, she makes a reappearance in Fortune Street. 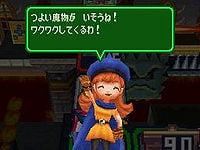 Alena as she appeared in Itadaki Street DS

Alena makes her debut into the Mario franchise in the cross-over game, Itadaki Street DS. Alena is one of the 11 playable Dragon Quest series' characters playable in this game.

Alena's Hat and Alena's Clothing are collectible items that can be equipped on customizable characters.