The Octopus from the Game & Watch games is a giant octopus that guarded treasure from both Mario and the diver from the self-titled game.

In the Game & Watch game Octopus, the Octopus guards sunken treasure from the player. It attempts to grab the player, and if it is successful, the game registers a miss. Although the manual does not name the octopus, it is called Ozzie the Octopus in a Nintendo catalog.[1]

In Game & Watch Gallery, a port of the original Octopus exists where it is played exactly the same, and so the Octopus's role is the same; however, a remake also exists in which Mario replaces the diver and goes down to steal the Octopus's treasure. Mario, however, would not just let the Octopus grab and attack him and would sacrifice his treasure to use as a weapon and throw it at the Octopus, stunning whichever arm was hit temporarily.

In Game & Watch Gallery 4, another port of the original Octopus is unlockable and playable, and it is a more authentic port than the one seen in Game & Watch Gallery. Another remake also appears; this time the Octopus has the ability to change color (orange, green, or blue), and it does so each time Mario earns 200 points. Mario can fight it back again by throwing his treasure sack at it, which makes it recoil and cry.

Aside from the above, the Octopus, or at least its arms, also appears in a humorous sequence that plays if the player selects the game yet does not actually start it. Mario arrives with a bag of loot in one hand and a Game Boy Advance in another. However, he ends up surrounded by four octopus arms (two on each side) that are menacing him. Trapped, he then calls on a Lakitu to help him. He then grabs the fishing pole of Lakitu and, trying to hold on, is ultimately forced to drop his belongings, with a crown and gold objects falling out of the loot bag. Finally, each octopus arm retrieves a treasure, including the loot bag itself as well as the GBA. 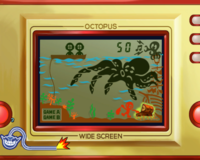 The Octopus guarding treasure in the microgame in WarioWare: Smooth Moves

The Octopus appears in the microgame Game & Watch Octopus in WarioWare: Smooth Moves in which the player must raise the Wii Remote at the correct time for the diver to escape the Octopus. 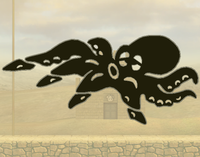 The Large Octopus appears in the minigame Octopus Dance in Nintendo Land, which requires the player's Mii to copy dance patterns by flicking the GamePad. The Large Octopus can be seen in the background of the screen, but he appears to have no effect on the gameplay. However, if players lose all of their hearts, the Large Octopus picks up their Mii and takes them away.

Octopus coverage on other NIWA wikis: