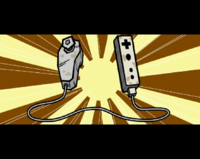 The Balance Stone connected to the Form Baton.

The Balance Stone is an important item in WarioWare: Smooth Moves. It goes along with the Form Baton, just like the Wii Remote and the Nunchuk attachment (the latter of which it parodies). In Orbulon's story, it crashes on the Oinker, which then falls near the Temple of Form. The Balance Stone lands right next to the Form Baton inside the building, and both start to glow. When Orbulon grabs them, the Temple of Form suddenly starts to rise. This starts his WarioWare: Smooth Moves game, "Secret of the Balance Stone", which one must play with both the Wii Remote and Nunchuk in order to accomplish, using the form named "The Diner."