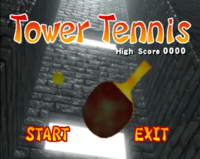 Tower Tennis is a minigame found in WarioWare: Smooth Moves. It is unlocked after completing Kat & Ana's stage. This minigame is most likely a longer version of the Serve Already! microgame. Also, the gameplay is similar to that of Breakout. 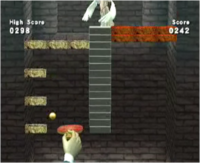 The minigame being played

The game is set in a dark tower with many blocks. The player must use The Remote Control or The Sketch Artist in order to bounce a Table Tennis ball with a racket, while the screen scrolls up. There are also many blocks that keep the player from progressing; these blocks can be broken with the ball, however. There are four types of blocks:

Occasionally, a pink flower appears under a trail of blocks. It swallows and spits the ball, causing it to go up fast enough (boosting the player's score) to break all those blocks at once. The game ends if the ball falls below the bottom of the screen.

Climb the tower without letting the ball drop in this thrilling action game! Is there any way out of this nightmarish tower? Only you can discover the answer! Use either the Sketch Artist or the Remote Control to play.