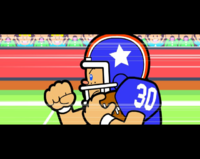 One of the players of the Diamond City Roughs.

The Diamond City Roughs dress in blue uniforms with stars on them. One of the players has a crush on Mona, so he tries hard to win the game so that he can impress her and, after the game is over, almost telling her that he loves her. She rides away on a motorcycle before he can get the words out, making him say it to a different cheerleader instead.