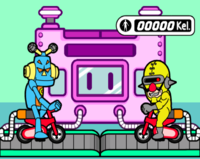 The Kelorometer is an invention built by Dr. Crygor in WarioWare: Smooth Moves. It is one of the game's levels. It was built to lose kelories. As the player starts playing the game, their Mii face will be composed into a red body. The player will then go into the machine, starting the level. The Kelorometer features 20 microgames. The recommended goal to achieve in this level is 5000 kelories. The high score on the game resets every day. After all the microgames are completed, the player's Mii will lose weight based on how many kelories have been burned.

The first 9 microgames are played in any order:

The 10th microgame takes 16 seconds, and can be one of the following:

The next 9 microgames are played in any order:

The last microgame takes 16 seconds, and can be one of the following:

It has been requested that this article be rewritten and expanded to include more information. Reason: Include all of Dr. Crygor's comments in the game over screen