“To eliminate a virus, you need to use a capsule.”
—Dr. Toad, Dr. Mario World

Capsules, also known as vitamins or vitamin capsules, are Dr. Mario's prescription of choice, seen in the Dr. Mario series. Invented by Dr. Mario himself,[1] capsules are an effective weapon against viruses, where they are used to match up with viruses of the same color to eliminate them. 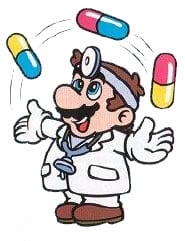 In Dr. Mario and its Vs. counterpart, capsules were first introduced, where they were known as vitamin capsules. They come in six different color combinations that include red, blue, or yellow (all red, all blue, all yellow, red and blue, yellow and blue, and red and yellow). For the Game Boy version, these patterns correspond to black, white, and gray/textured colors.

In the games, Dr. Mario throws vitamin capsules into the bottle and will have another ready, which acts as a preview on what the next vitamin capsule is. He will throw that capsule if the current capsule landed, and will repeat until all the viruses are eliminated or a game over is obtained. In 2-Player game, the vitamin capsules appear at the mouth of the bottle instead of being thrown in. Because of this, the cooldown between a capsule landing and a new capsule being added is shorter than in 1-Player game.

In a 2-Player game, if multiple capsule matches are made in a single move, colored pieces will fall into the opponent's bottle depending on the colors cleared which is determined by what the colors of the matched rows or columns are, and also the amount of matches made during the move, where clearing two, three, or four lines will result in two, three, or four pieces falling into the opponent's bottle. Clearing more than four matches will still result in four pieces instead of more. The stray capsules start to fall after the opponent lands their current capsule, and they has to wait for the stray capsule pieces to land before they can use the next capsule. 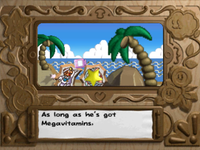 While the capsules during gameplay are referred to as one of the following either in-game or the manual: "vitamin capsule", "capsule", or "vitamin", there is a separate type of medicine called the Megavitamins in Story mode. These Megavitamins belong to Dr. Mario and are contained in a bottle, who uses them to cure patients all day long due to them being struck by flu season. Whenever the effects of the Megavitamins are applied, a star appears and envelop the one who consumes them. After both Wario and Mad Scienstein each separately witness Dr. Mario using his Megavitamins to cure an ailing Octo, they each plan to steal it for their own use: Wario plans to use the medicine to take advantage of the situation to enrich himself, while Mad Scienstein was tasked by a hidden figure to steal them for him. After Mad Scienstein steals the medicine at Dr. Mario's house after he left it for a short while, Wario discovers the thief and chases him while Dr. Mario returned. Dr. Mario thought Wario has stolen them in the ensuing chaos until he is proven to not be the thief, but when the real thief scrambles away from the scene, both Dr. Mario and Wario chase Mad Scienstein until they reach Rudy's castle. If Dr. Mario is the chosen character, he eventually uses his Megavitamins to cure Rudy, who had a cold, but if Wario is the chosen character, Mad Scienstein will snatch the Megavitamins from Wario in the end, prompting a never-ending chase. This brand of Megavitamins are also shown to have a transforming property when consumed, where in Dr. Mario's case, it causes him to transforms into Metal Mario, whereas in Wario's case, it causes him to transform into Vampire Wario.

In Dr. Mario & Puzzle League, the capsules are known as "vitamins". They appear in the Dr. Mario segment of the game. They behave the same way as in the first Dr. Mario game. Similar to Dr. Mario 64, the preview image of the vitamin can toggled, this time with

In Dr. Mario Online Rx, capsules behave similarly to previous Dr. Mario games. Starting from this game, instead of having only one capsule in preview, three capsules are in preview. Also starting from this game, capsules can instantly be dropped if the Quick Drop option is enabled, where pressing up will result in the capsule landing faster than if down is held to drop it. In multiplayer games, the previewed capsules are in a separate container instead of being at the top of the bottle, resulting in new capsules being thrown into the bottle instead of being dropped, thus having a longer cooldown between a capsule landing and a new capsule being introduced, compared to the multiplayer in previous games.

In Virus Buster, the capsules behave differently from the main Dr. Mario mode, though a capsule match of four will still result in them and any viruses being cleared. For this mode, up to three capsules can drop at once, and if any capsules fall because they are not supported at the bottom, a player can control any falling capsules, including half-capsules. Additionally, these capsules can quickly be dragged into open spaces if they can fit, even though the capsule is obstructed by any objects between them and the open space. Falling capsules will not be able to interact with other falling capsules, and will only become solid if they landed on something.

In Dr. Mario Express, capsules behave similarly to previous Dr. Mario games, and is controlled similarly to the Dr. Mario mode in its predecessor Dr. Mario Online Rx. In Vs. CPU mode, Dr. Mario is present to throw the capsules into the bottle on the player's side, unlike in the other multiplayer modes in other games. The CPU still has a separate container where new capsule are added from.

In Dr. Luigi, Capsules return in both Retro Remedy and Virus Buster, where they behave similarly to previous installments. One change for this game is that it is possible to switch a capsule's colors in a narrow column or row if the capsule cannot be rotated, whereas previously, the capsule would be stuck in that position if it is in a narrow gap.

For this game, a new variant of capsules known as L-capsules are introduced in Operation L, this game's new mode. L-capsules are two capsules attached together in a blister pack so that they form the shape of an "L", similar to the L-block in Tetris. The color patterns for these L-capsules differ depending on the selected Speed: if Low and Med are selected, there will be three pieces with one color and three pieces with another color, where the three pieces are the vertical capsule and the left half of the horizontal capsule adjacent to vertical capsule. If High is selected, both halves of one capsule has one color and the other capsule has another color on both halves, resulting in two pieces of each color. In a match between two players, if a combo is made by one player, their opponent's next L-capsule will have its colors changed.

If any part of the L-capsule lands on an object, the blister pack will disappear and if the capsules are in air, they will fall. However, if there is a capsule match, it will be made before the capsules fall. Because of the larger size of the L-capsule, the player will get a game over if capsules are stacked so that one of the two middle spots in one of the two topmost rows is occupied with a capsule. 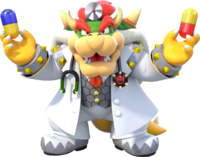 In Dr. Mario World, Capsules work a bit differently as they need to only make a match of three in a row or column instead of four, including viruses, in order to be cleared alongside any viruses in the line. Also, two capsules are in preview at one time, rather than three like in more recent games. The capsules have similar controls to the Virus Buster mode in previous Dr. Mario games that have it, where they can be moved by dragging it and rotated clockwise by tapping it. The primary difference is that instead of capsules falling down, the capsules in this game will float upwards. Moreover, the player can rotate the capsule before it is brought to the stage, instead of the capsule being automatically being pushed to the stage, and they can bring as many capsule into the stage as possible. Rather than the capsules gradually moving by gravity even though it is being controlled, it is possible to hold the capsule so that it does not float. Finally, it is possible to push a capsule or any floating object upwards by pushing the controlled capsule below them upwards. In this game, doctors have a skill meter that can be filled by making capsule matches.

The capsule segments can come in more colors besides red, blue, and yellow, where there are also green, light-blue, and pink, to account for different colors of viruses present in the stage. For example, if the stage has red, blue, and green viruses, any combination of red, blue, and green capsules will appear. Although purple capsules exist in the data, it is unused because purple viruses never appear during gameplay. Capsule Blasters return, but as items, where it can be used to remove all capsules in the stage, but in version 2.0.0, it is replaced with the Capsule Swapper, which can be used to change the current capsule for a different one. Certain doctors and assistants have skills that can be used to manipulate the capsules, such as Dr. Baby Daisy's ability to render the next few capsules to have the same color on both halves, and Blooper's ability to possibly change the first few capsules to have the same color on both halves.

In the Super Smash Bros. series, capsules depicted in the Dr. Mario series are mainly used by Dr. Mario, where the move is known as Megavitamins. Like in the Dr. Mario games, the capsules are randomly generated with different color combinations, though this has no effect on the attack itself.

In Super Smash Bros. Brawl, a Capsule depicted in the Dr. Mario series appears as a sticker, which boosts the attack of the equipped character by five points.

For Dr. Mario's Final Smash, the Doctor Finale, he fires a pair of giant vitamin capsules that push back any opponents in their path, damaging them in the process. The move behave similarly to Mario's Mario Finale, but Dr. Mario's deals greater damage and knockback.

In Super Smash Bros. Ultimate, capsules return as Dr. Mario's neutral special move called Megavitamins. For this game, the vitamin capsules are not only larger, but also gained a higher launching angle, increased hitlag, decreased ending lag, better hitbox placements and increased knockback. Altogether, these changes make them much more effective for camping and setting up combos at the comparatively minor cost of their ability to lock a downed opponent.

In Super Mario Maker, when playing as Dr. Mario's costume, holding the

button results in Dr. Mario holding up a capsule. 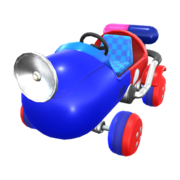 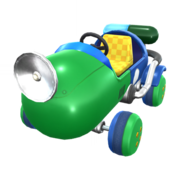 Capsules appear in Mario Kart Tour as new items starting from the Doctor Tour. They are the special skill of Dr. Mario, Dr. Luigi, Dr. Peach, and Dr. Bowser. When used, three capsules orbit the player's kart, and the player must then tap the screen to throw them all at once; when they do, the capsules bounce toward opponents, and they cause them to spin out when hit. When Capsule+ is activated, the capsules are slightly bigger, and a fourth one is added.

Capsule coverage on other NIWA wikis: