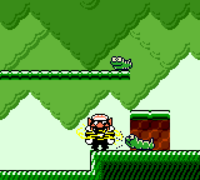 Wario trapped in a Silky's string.

A Silky is a worm-like creature that first appeared in Wario Land 3 as an enemy, and later in Dr. Mario 64 as a character disturbed by Dr. Mario.

In Wario Land 3, a Silky has the ability to give off a special string from its mouth, which turns Wario into Ball o' String Wario. Silkies appear in several levels such as The West Crater and Out of the Woods, and typically appear in groups of three or more in a room. Said rooms also typically have winding passages with lots of walls, so if Wario becomes Ball o' String Wario, he will potentially get knocked a large distance back. They can be defeated by any type of attack.

Silky reappears in Dr. Mario 64 as a playable character in most modes and as an opponent in Story Mode. In Dr. Mario's storyline, Silky was out crawling about in the woods when Mad Scienstein and Wario run past it. Dr. Mario shows up and is glad that Silky is safe, until Silky turns around, shocked that Dr. Mario scared him, and battles him. After the fight, he never shows up again. Silky is not fought in Wario's storyline.