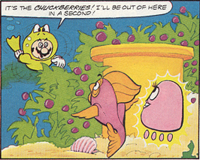 Chuckberries are rare berries from the Nintendo Comics System book, Love Flounders. They appear to only be found on underwater bushes, and are so rare that people searching for them could go empty-handed for weeks, or even months without finding some. They are considered to be a very romantic gift.

During the events of Love Flounders, Princess Peach sends Mario (dressed as Frog Mario) on a mission to find chuckberries for her cereal. Mario accepts and travels underwater, where he is able to quickly find some of the berries. However, he is stopped by an angry mob of undersea enemies (who wanted him to go out with Bertha). Mario dodges the enemies, though, and is able to get the chuckberries. On his way out of the ocean, Mario meets Bertha, who kisses him, causing Mario to lose his Frog Suit and become the normal Mario. Bertha admits that she actually thought Mario was a frog and finally knew that nobody really liked her, so she leaves Mario to be alone. Mario, however, decides to give the heartbroken Bertha his chuckberries to cheer her up, as they are considered to be a romantic gift. It is later learned that Princess Peach "got bored" while Mario was gone and ate his bowling ball from the Bowling for Pasta Tournament, which ended her hunger for the chuckberries.

Their name is likely a pun on singer-songwriter Chuck Berry.