Love Flounders is an issue of the Super Mario comic series published by the Nintendo Comics System. 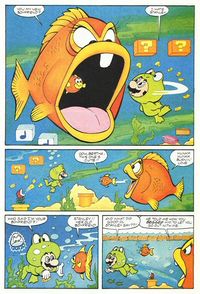 Luigi and Toad enter the royal throne room, telling Mario (who is in a Frog Suit) he's going to be late for the "Bowling for Pasta" tournament. Mario states he's not going because he has to get chuckberries for Princess Toadstool's cereal. However, chuckberries are rare fruits, and it could take Mario days to find some. As he wonders what else could go wrong, Stanley the Talking Fish pops out from under the water.

Now underwater, Stanley introduces Mario to his new girlfriend, Smookers, who isn't the brightest Jelectro in the sea. Mario wants Stanley to leave him alone, but Stanley has a date with Bertha and wants Mario to help him get out of it. Mario agrees, only because he wants Stanley gone. Unfortunately, Bertha shows up, asking if Mario is her new boyfriend. Stanley apparently told her that Mario begged him to go out with her. Mario then proceeds to flee. Meanwhile, Smookers asks how Bertha took the news of Stanley's breaking up with her. They watch as Mario swims for his life through a pack of jelectros. Mario hides in some seaweed and is able to escape from Bertha and her Baby Cheep. A Jelectro comes up behind him and asks if he's looking for chuckberries, and tells him not to run away from Bertha. Mario turns to find the chuckberries, but the jelectro and several other creatures don't want him to have it, as it means one of them will have to be Bertha's boyfriend.

Stanley gives the chuckberries to Smookers, but Mario rushes up behind them and snatches it. Smookers wonders if Stanley really did settle things with Bertha. Mario escapes from the other fish, but comes up to Bertha. She kisses him and takes away Mario's frog suit. Bertha is shocked and hurt, assuming Stanley lied to her and that everybody hates her. Mario gets ready to leave, but sees Bertha sulking, and gives her the chuckberries. He tells her he doesn't love her, but wants to be friends with her. She gleefully accepts, and promises to beat up Stanley the Talking Fish, who had just been dumped by Smookers. Mario returns to the castle, where Princess Toadstool had just eaten Mario's bowling ball (made of meat). She sends him off again to get some Bi-Carb Crystals.