Ostros are large, flightless birds that first appeared in Super Mario Bros. 2, and are said to be a mode of transportation in Subcon.[1]

Ostros made their debut in Super Mario Bros. 2, where they are ridden by red Shyguys that try to steer them towards the player. If their rider is dislodged, the Ostro travels in a straight line. Players can jump on top of an Ostro and ride it across obstacles even if it still has a Shyguy rider. Ostros can be picked up, but they do not bounce when thrown. In Super Mario Advance, they drop hearts when defeated.

While Ostros are black with white wings and legs and red eyes in the NES version of the game, subsequent remakes have depicted them as being pink with a white belly, wings that are the same color as their body, orange legs, black eyes and a pink feather on their heads. The original artwork's attributes are mostly true to the original sprites, though they have yellow beaks and legs, as well as a white tuft on their heads. The artwork for the Japanese release of Super Mario USA lacks the feather on the head the original artwork had, and depicts it as having three toes on each foot, unlike the original artwork and real ostriches, which have two. This artwork was retouched for Super Mario Advance, coloring it pink, but retaining the lack of feather and white wings.

In the cast roll of Super Mario Bros. 2, Ostros' and Birdo's names are mistakenly swapped; this mistake is fixed in Super Mario Advance. 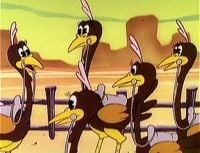 Several Ostros, though usually referred to as ostriches, appear in several episodes of The Super Mario Bros. Super Show!, where they are usually ridden and used to haul motorless vehicles, much like horses. Due to their role, Ostros never have any speaking lines, and usually make honking noises. They first appear in the episode "Butch Mario & The Luigi Kid", where several Ostros are used by Mario, Luigi, Snifits and several other characters as steeds to travel through the Wild West. A wild ostrich appears in "Too Hot to Handle" on the island of Waki-Waki. Mario, Luigi, and Toad ride it to reach Princess Toadstool faster. Like in the game, they are black, but can also be a dark brown color. Additionally, their wings are orange, have pink feathers on their head, and possess a purple saddle, and bridle.

Ostros were also given homage in the Super Mario Bros. film, which featured a sign with the word "Ostro" on it.

Daucho
Tribe: Fly clan
Disposition: Alert and obedient
Game appearances: USA
Ostriches running around at high speed?
An ostrich-like character in Mario USA. He runs around at high speed with a red Shyguy on his back. It is not particularly scary as it does not attack. His American name is Birdo.

Bio: ヘイホーレッドを背中に乗せて走ってくる。[4] (It comes running with a red Shyguy on its back.)