Not to be confused with Goose. 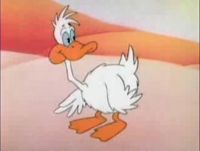 Goosey,[1] as referred to by Mario, is a large, roughly human-sized goose capable of speaking, and an ally of Mario, Luigi, Toad and Princess Toadstool appearing in The Super Mario Bros. Super Show! episode "Mario and the Beanstalk".

In "Mario and the Beanstalk", Goosey is shown to be a prisoner of King Koopa, being held in a bird cage suspended from the ceiling in his castle in the sky. With Goosey captured, King Koopa casts a magic spell on it, making it so the only thing Goosey can lay is Gold Coins.

Later, after Mario, Luigi, Toad and Princess Toadstool are trapped in the cell of Goosey by King Koopa, Goosey is forced by King Koopa to bury them in a shower of Gold Coins. As it lays Gold Coins, Goosey begs Mario to set it free, saying that if he did so, it would help him and his friends escape from King Koopa. Deciding to trust Goosey, Mario scales a large mountain of Gold Coins and reaches Goosey's cage, the bars of which he bends apart, making an opening for Goosey to step through.

After fighting several Hoopsters on the beanstalk, Goosey, Mario, Luigi, Toad and Princess Toadstool manage to reach the cottage. As Luigi begins chopping down the beanstalk so King Koopa cannot follow them down, Goosey asks Mario, Toad and Princess Toadstool if there is any way it can thank them for saving it; hearing this, Mario asks Goosey if it could give them one hundred Gold Coins that they could donate to the Mushroom Kingdom Orphanage. Goosey responds to this question by saying that it cannot lay Gold Coins anymore, as without King Koopa's magic spell, which was apparently broken when Goosey was taken from King Koopa's castle.

Luckily, when the beanstalk, which Luigi cuts down, falls, it takes King Koopa's castle with it; as the castle fell, all the Gold Coins that Goosey had laid earlier fall from it, showering Mario, Luigi, Toad, Goosey and Princess Toadstool in them. Goosey is last seen trying to lay some eggs for the hungry Mario, Luigi and Toad, only to be surprised to see she could only lay solid gold eggs.