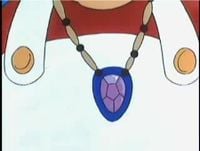 A magic doodad is a small, yet powerful piece of jewelry, two of which are owned by the Mouth of the River.