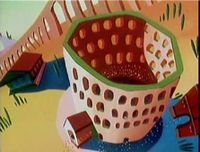 The Linguini Empire Colosseum is extremely large, having rows upon rows of stands for spectators to events held in the colosseum to sit in. Underneath the colosseum is a large system of catacombs containing various passages and cells, this dark area is lit by several wall mounted torches. Horses and possibly other creatures are seemingly kept in these catacombs. A portion of the colosseum was seemingly destroyed accidentally by Emperor Augustus Septemberus Octoberus Koopa when he was bashed into a support pillar of the colosseum, causing a wall to collapse.

Brutius Maximus Grouchimus, a muscular gladiator, claims to be the guardian of the Linguini Empire Colosseum, despite this though, he acted as a minion of the evil Emperor Koopa in "The Great Gladiator Gig".