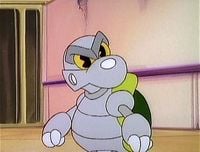 Robo Koopas are robots that are modeled after Koopa Troopas. Little is known about them, as they only made a few brief appearances in The Super Mario Bros. Super Show! episode "Robo Koopa". Their voices are identical to those of natural Koopa Troopas.

Later on, a Robo Koopa makes another appearance, this time to alert King Koopa that Mario and Luigi have returned to fight him in their new Plumbinator suit. After King Koopa is exiled from Robo Land, the Robo Koopas are never seen again.