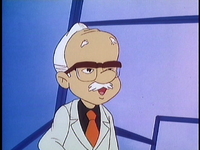 Dr. T. Garden is a famed scientist, one of the best in the world, and an inhabitant of the oriental city Sayonara; he is also the inventor of the powerful Super Sushi, which can make whoever eats it bigger and stronger.

In The Super Mario Bros. Super Show! episode "Mario Meets Koop-zilla", Mario, Luigi, Toad, and Princess Toadstool, wanting to know how King Koopa has attained his new gigantic size, visit Dr. T. Garden for answers. Upon greeting Mario and his friends, the doctor reveals to them through the use of his laboratory's hidden camera that King Koopa has become the colossal Koop-zilla by breaking into his laboratory and eating his latest and most powerful batch of Super Sushi, destroying the building, which had only recently been reconstructed, in the process.

After a failed attempt to capture Koop-zilla with a steel net, Mario and his friends return to Dr. T. Garden's laboratory, where they ask him to create a new batch of Super Sushi for Mario to eat. After Mario eats this Super Sushi, Dr. T. Garden and the others flee from the laboratory, which is rapidly crumbling due to Mario growing through the roof of it. Eventually, while Mario and Koop-zilla engage in a titanic battle, Dr. T. Garden, in his shoddily rebuilt laboratory, creates an antidote to Super Sushi known as Super Sushi Shrinker, which he gives to Luigi, Toad, and the Princess in a large needle so they can administer it to Koop-zilla and shrink him back to his normal size.

After Koop-zilla is defeated and he and Mario have been shrunk back to normal size, Mario and his friends return to Dr. T. Garden's laboratory, where they are thanked by the doctor for driving Koop-zilla out of Sayonara. As Dr. T. Garden thanks Luigi, Toad, and Princess Toadstool, he notices that Mario is eating one of his inventions and tries to warn him not to. However, his warning comes too late as Mario has already eaten the Shrinking Sukiyaki and been shrunk to minuscule size, which the doctor informs him will take a whole week to remedy.