“By the pricking of my thumbs, something wicked this way comes! Oh, sorry. You are but an inoffensive plumber. Get thee hence! I need inspiration! It is my verse that wants repair, not my pipes.”
—William Shakespeare, Mario's Time Machine

William Shakespeare (baptized April 26, 1564 - April 23, 1616) was an English playwright, poet and actor. Born in Stratford-upon-Avon, he later became successful as an actor and especially as a writer. Across his lifetime, he produced more than thirty plays and a hundred sonnets covering a variety of genres and styles, and is often heralded for the quality of his works. He flourished in the Elizabethan era in no small part due to the contributions of Queen Elizabeth I. He married Anne Hathaway in 1582, and had three children, Susanna Hall, Judith Quiney, and Hamnet Shakespeare.

A bust of him is stolen from Westminster Abbey in Mario is Missing!, and Luigi eventually finds it and returns it. Some people in the game also make allusions to his plays and poems: for example, when a tourist in London is shown the bust, he says, "To be or not to be, it looks like Shakespeare to me." 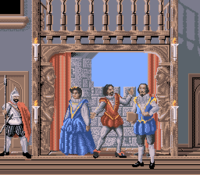 William Shakespeare in the SNES release of Mario's Time Machine

In Mario's Time Machine, William Shakespeare is in Stratford-upon-Avon in 1601, where he is preparing to unveil the first performance of his newest play, Hamlet, with Richard Burbage and the Lord Chamberlain's Men. At this point, the Skull that is needed for a pivotal scene in the play is stolen by Bowser, who had traveled back in time. Mario later steals the Skull back and travels back in time himself in the hopes of returning it. However, Mario does not know that the Skull is a part of the play; if Mario visits William Shakespeare first, he attempts to introduce himself, but Shakespeare tells him to leave, as he is focused on the play and does not need to see a plumber. Thus, Mario is required to talk to other people beforehand (including Anne Hathaway and Richard Burbage). After confirming it, Mario visits Shakespeare and returns his Skull. Shakespeare is overjoyed to have the Skull, as they were about to start the play without it, and thanks Mario for his help. Mario then asks him if he could have a role in the play, but Shakespeare says that all of the roles are filled. As a consolation gift, he writes him an exit line: "Goodnight! Parting is such sweet sorrow that I shall say goodnight till it be morrow. All's well that ends well!" This is a combination of different lines from two of Shakespeare's plays: Romeo and Juliet, when Juliet says goodbye to Romeo, and All's Well That Ends Well, said by Helena in two different situations.