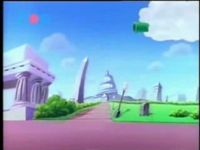 Washington, D.C., formally the District of Columbia, also known as just Washington or simply D.C., is the capital city and federal district of the United States of America. Many famous and important buildings are located in the city, including the White House and the Washington Monument.

Washington, D.C. is featured in The Adventures of Super Mario Bros. 3 episode "Reptiles in the Rose Garden". Because Bowser wants to take over America for Kootie Pie, he has to fly to Washington on the Doomship and warp the White House to Dark Land. While the White House is gone, Kootie Pie rules as "Empress of America" and announces her "new laws". Eventually, Mario returns the White House to Washington (after accidentally placing it on top of the Washington Monument with the Levitation Beam before putting it back in its proper location) and warps Kootie Pie back home.

In Mario's Time Machine, Mario travels back in time to the White House in 1863 (although the Timulator only says "Washington, D.C."), as he needs to return the Spectacles of the then-president Abraham Lincoln.

Some members of the Kong Family travel to Washington in the Club Nintendo comic "Donkey Kong in: Banana Day 24" in order to talk to the President.