“This rumble stuff is kinda scary! I really gotta fight my own cousin?”
—Painter, "True Colors" 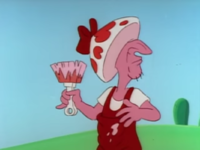 Painter, confused about the ongoing rumble that the Koopas were bringing up.

Painter is a minor Mushroomer character that appears in The Adventures of Super Mario Bros. 3. He is Baker's cousin, and the pair make their sole appearance in the episode "True Colors". Painter appears as a Mushroomer with a slightly hairy chin and red-tinted skin, wearing red overalls.

Painter was one of the many Mushroom people hit by the Koopa Color Goopa that Cheatsy and Kooky were spreading all over the Mushroom Kingdom. He is first seen painting a wall for one of his jobs. When Kooky, disguised as a blue-tinted Mushroom person, begins painting over his wall in the midst of him working, Cheatsy proclaims that the blue Mushrooms "just don't get along very well with the reds." He and Kooky proceed to goad him and everyone else into having a "red versus blue" rumble tomorrow morning, pitting the Mushroom people against each other.

The Mushroom people arrive for the rumble the next day, with several of them still unclear on the reasons they had to fight; Painter in particular is hesitant to fight his own cousin (who was turned blue). The rumble almost starts up regardless, but just before it could begin, Mario and Luigi rush in to warn the Mushroom people that Princess Toadstool has fallen in a warp drain and needs their help. The Mushroom people rush over to Toad to find Princess Toadstool, who was unharmed and glad that everyone was off the battlefield. Mario then takes the opportunity to give a speech, stating that they are all Mushrooms no matter of what color they are. Painter is then reunited with his cousin Baker. He is not seen after this point, and it is unknown what his exact appearance is once the Koopa Color Goopa wears off near the end.