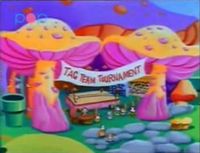 The Tag Team Wrestling Tournament is a wrestling event hosted by the Mushroom Wrestling Federation at an arena in the Mushroom Kingdom. It takes place during The Adventures of Super Mario Bros. 3 episode "Tag Team Trouble".

One of the Sledge Brothers then squirts Mario and Luigi with some weird goop from one of Cheatsy's traps, and they prepare to crush the Marios. Princess Toadstool, fed up with all the cheating, runs out of the arena and returns with two Starmen, which Mario and Luigi use to defeat the Sledge Brothers just before they can be announced the winners, as well as Bowser and Cheatsy.

The Mushroom Referee is about to award Mario and Luigi with the prize money, but Toad takes it, and runs off to the orphanage, unaware of the fact that he had already donated money.