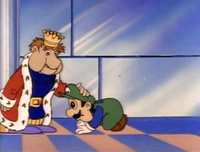 Luigi has arrived at the castle of King Windbag. As Luigi enters the dining room, he believes he's being yelled at by King Windbag, and ducks from a cooked turkey that had been thrown in his direction. Luigi then realizes that King Windbag had been bossing his servant around. Right after he properly greets Luigi, King Windbag bluffs about how the floor is dirty and orders his servant to mop it up.

Luigi tells Windbag that he has been sent over by Princess Toadstool so that he could try to make him less of a bully. Windbag thinks Luigi is bluffing, then pulls out his magic wand and threatens to shoot his servant, demanding for him to serve him a cooked duck. As the servant runs off, Windbag comments that a dog would make a better servant. Overhearing this comment, the servant tells himself that he might as well be a dog due to Windbag's harshness.

As the servant walks off, Hip and Hop Koopa, who had been hiding behind a pillar, get an idea upon hearing the servant complain, noting that King Koopa had told them to follow Luigi so that they could cause trouble for him. After Windbag yells for his duck, the servant returns with a covered plate, only to be tripped by Hip. While Hip puts on the servant's hat, Hop hides on the covered plate. 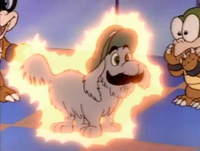 Luigi after being transformed into a dog.

When Hip enters Windbag's throne room disguised as the servant, Hop leaps out from under the covered plate and steals Windbag's wand from out of his hand. As Windbag tries to get his wand back, Hop throws it over to Hip, who uses it to transform the king into a bulldog. Luigi tries to take the wand back from Hip, but Hip throws it to Hop, who in turn uses it transform Luigi into a gray mutt.

With Windbag and Luigi as dogs, the two of them chase Hip and Hop out of the castle and down several flights of stairs to the ground. A Ptooie pops out of a Warp Pipe and tries to shoot Luigi, but it misses. Luigi chases Hip and Hop up onto some platforms, but is assaulted by a Lakitu that throws a Spiny at him. As Hip and Hop climb into a pipe, Hop knocks him back with the wand before they go down it. Left with no other options, Luigi and Windbag follow Hip and Hop down the pipe.

The two dog forms Luigi and Windbag before avoiding the incoming vehicle.

At the other end of the warp, Luigi and Windbag find themselves crawling out of a manhole in the Real World, more specifically, Miami, Florida. The two of them hide in the manhole as a trackless train drives over their heads, and when they come out again, Luigi spots Hip and Hop riding on the back seat.

Following the train to a gated hotel, Luigi tells Windbag to wait for the gate to open for the next car, so that they can run inside with it. King Windbag huffs about how royalty never runs, but he goes along with Luigi's plan. When the train pulls up at the hotel, Hip and Hop steal the hats off of the two ladies sitting in front of them, and run inside, where they smell food. Windbag tries to go after them, but Luigi notes that dogs are not allowed inside and decides to sneak in through a dining room window. 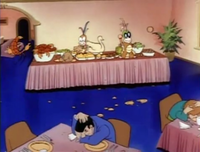 Hip and Hop throwing foods from the buffet table.

Hip and Hop reveal themselves by throwing all sorts of food around the room from a buffet table. As Windbag jumps onto the table, he crashes into a bowl of lobsters which pinch his body, as Hip and Hop flee. Before the transformed dogs can chase Hip and Hop into the next room, the dog catcher shows up. He chases Luigi and Windbag upstairs, where they jump out of a window, and down a slide into the pool. After crossing the pool, Windbag gets captured in his net. Luigi chases Hip and Hop to a sports car in the parking lot, but he too is captured by the dog catcher.

While Hip and Hop go for a joyride in the sports car, Luigi and Windbag are thrown into the back of the dog catcher's truck, where Windbag and Luigi comment that they will never get the wand back and that they will be stuck as dogs permanently, and be unable to return home. While Hip and Hop drive off, they listen to a report on the radio about a space shuttle launch at the Kennedy Space Center going on the next day, and decide to visit it.

Meanwhile, the dog catcher brings Luigi and Windbag to the Florida State Poochitentiary, where they are sentenced to a kennel with several other dogs. When Windbag tries to bully one of the dogs around, he counters Luigi's bickering by stating that he is a king. Luigi tells Windbag that if they work with the dogs, they can form a pyramid to reach the air vent on the ceiling. Because the dogs will not obey the rude Windbag, Luigi politely tells them what to do, and then gets a reluctant Windbag to stand at the bottom of the pyramid. As Luigi makes his way through the vent, another dog's tail causes Windbag to sneeze, collapsing the pyramid.

Luigi travels through the vent to the dog catcher's office, where the dog catcher is asleep in front of the TV. As Luigi climbs down from the vent on a hanging light wire, a news flash appears on the TV. The reporter is on the highway, where she gives an emergency report about a sports car rampaging through Florida to the Kennedy Space Center, just as Hip and Hop drive past her. 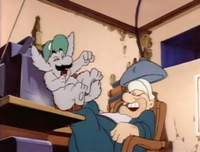 Luigi after falling from the dangle lamp.

The light that Luigi is on falls down from the ceiling, and hits the dog catcher's head, waking him. As he tries to grab Luigi, Luigi leaps onto the control panel, and unintentionally releases all the dogs in the building. As Luigi slips out of his office, the dog catcher grabs him by the tail. However, the dog catcher lets go as all of the dogs come running over him. When Luigi meets up with Windbag, they run outside, hijack the dog catcher's truck, and drive off.

Luigi and Windbag digging their way through the fence of the Space Center.

Later, outside the Kennedy Space Center, Luigi and Windbag are unable to get over the surrounding fence by jumping. Windbag points out that they should dig, seeing as how they are dogs now. Meanwhile, as a group of astronauts makes their way to the space shuttle, Hip puts the two in the back to sleep with the wand, allowing him and Hop to change into their suits, just as Luigi and Windbag come out on the other side of the fence.

Luigi and Windbag are startled by the dog catcher, who tries to catch them with a lasso. Luigi and Windbag take care of their captor by running circles around him, and he gets tangled up in his rope, allowing them to chase after Hip and Hop. King Windbag tackles Hip and Hop and stops them from boarding the elevator to the shuttle. As Hip drops the wand, Luigi grabs it and tosses it over to Windbag. 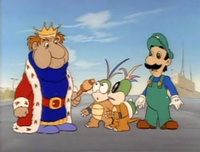 Luigi and Windbag being reverted back into humans.

With his wand back, Windbag uses it to put all the humans nearby, including the dog catcher, to sleep. He then restores himself and Luigi back into humans. As Hip and Hop try to run off, Luigi grabs them, while Windbag creates a Warp Zone that leads back to Kastle Koopa with his wand, which Luigi drops them into. Looking at the sleeping man, Windbag feels that he would be a kinder dog catcher if he knew what it was like being a dog, so he turns him into a yapping poodle for a few seconds. Windbag then uses his wand to wake everyone up and creates another Warp Zone that he and Luigi enter. As the dog catcher wakes up, he cannot believe the "nightmare" he just had, and proceeds to scratch his ear with his foot.

Back at Windbag's castle, the king can be heard yelling "Duck!" to his servant. However, Luigi watches as Windbag presents his servant with a cooked duck, along with mashed potatoes and peas. Windbag winks to Luigi, as a reminder of what he learned on their adventure, and Luigi winks back. 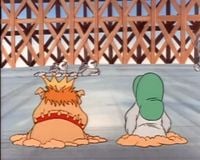