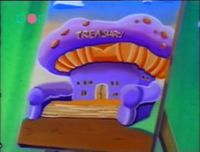 A picture of the Mushroom Kingdom Treasury

In The Adventures of Super Mario Bros. 3 episode "Crimes R Us", Bowser feels that his Koopalings have pulled enough "small crimes", and figures that it was time for them to pull the ultimate crime: stealing one billion gold coins from the Mushroom Kingdom Treasury.

Although the Koopalings make their criminal tutor Crime Wave Clyde believe that he is going to help them plunder the treasury, they instead betrayed him, and nearly blow him up with a Bob-omb.

While the Koopalings prepare to break into the treasury using a Bob-omb, a Chain Chomp, a Fire Snake and a Ptooie, Crime Wave Clyde recruits his former foes Mario and Luigi into helping him stop the Koopalings. Arriving at the treasury before the Koopalings finally brake in, Clyde and the Marios wait for the Koopalings to discover them, only for them to be tied and returned to the Doom Ship, along with a big Bob-omb surprise. With the Koopas gone, the robbery is foiled.