“I'll catch that faucet face with another one of my nifty gizmos: The Plumber Pole!”
—Kooky von Koopa, "Oh, Brother!" 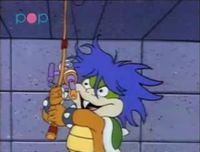 The Plumber Pole is a modified fishing rod built by Kooky von Koopa, which is capable of being cast through a series of Warp Pipes, hooking a Mario brother, and pulling him back through the pipes.