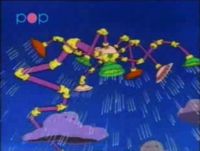 In The Adventures of Super Mario Bros. 3 episode "Oh, Brother!", Kooky has activated the Power Shower two weeks prior to the events of the episode, forcing rain to pour through the Mushroom Kingdom and down through a Warp Pipe leading to the Pipe World. The water then travels through the Pipe World, flushing out all the loose Gold Coins and washes them into a basin in one of Bowser's dungeons.

When a pipe in the dungeon that supplies water to the Power Shower has burst, Bowser ordered Kooky to fetch Mario so that he can fix it. After Kooky catches Mario with his Plumber Pole, he uses his Lame Brainer to make Mario their mindless slave. With Mario under the Koopas' control, he fixes the leak in the Power Shower.

After Luigi saves Mario, the two of them managed to dismantle the Power Shower, and it is never seen again.