Wizard King of the West

“Luigi! Mario! Those cruddy Koopas are gonna capture my wand if you don't stop them!”
—Wizard King of the West, "A Toadally Magical Adventure" 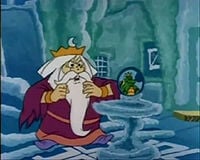 The Wizard King of the West, shortly exclaiming after seeing the wand done.

The Wizard King of the West is a king who appears only in the The Adventures of Super Mario Bros. 3, in the episode, "A Toadally Magical Adventure". His name is a reference to the Wicked Witch of the West, a character from The Wizard of Oz.

He is first mentioned by his messenger arriving at the Ace Magic Wand Factory, where his wand is made and ready to go. The wandsmith delivers it to the messenger and the messenger goes through a trap door to deliver it to the Wizard King of the West. The Wizard King of the West is watching this by his crystal orb, impatient now to see his wand done by commenting, "I've been waiting for that slowpoke to finish that wand for 50 years," meaning he ordered the construction of it 50 years ago.

After commenting that, he sees Cheatsy Koopa in the crystal ball plotting to steal that wand by watching the actions through a telescope. After seeing that, he plans to send Mario and Luigi an urgent message. 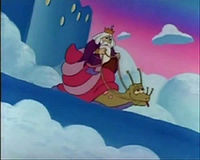 The Wizard King riding on his snail Faster Lightning.

Shortly after Mario and Luigi foil the Koopas' ambush plan, the wand safely arrives at Mario and Luigi's house. Toad wants to use the wand but the messenger says that only qualified members are going to be using the wand. The Wizard King is watching this event through his crystal ball. He agrees with the messenger and he sets out to get his wand by riding on his snail, Faster Lightning, which he arrives at the end of the episode.

He arrives when the Koopas leave and Kootie Pie saying, "Let's koop out of here," and the Wizard King agreeing with it. The Wizard King then uses a transporting laser on his wand (which is on Toad's hand at the time) to make the wand in his possession. He then uses the wand to lend the Mario Bros. a "hand" and then transforms the Pipe Monsters Toad created into a hand that grabs the Koopas and sends them hurtling back to their castle.

The Wizard King then reveals at the end of the episode he wants the wand to toast sausages and accepts Toad's apology for messing around with his wand by stating he only cares if he gets his wand.